Google announced yesterday that the web giant will partner with Historypin to debut an educational online gallery to commemorate Queen Elizabeth II’s Diamond Jubilee, which marks the 60th anniversary of her reign in the United Kingdom.

The partnership will use Historypin’s tools for pinning user-generated content to locations on Google Maps to draw attention to Elizabeth II’s prolific travels. History enthusiasts can pin audio, visual and photographic content to Google Maps locations with historical connections to the Queen and her travels. At the level of Street View, they’ll appear as overlays on panoramas of contemporary locations.

“The interactive gallery is an opportunity for anyone to contribute to and celebrate The Queen’s Diamond Jubilee on one global platform,” wrote Google geospatial technologist Ed Parsons. “We’re honoured that Google Maps can form the foundation of this official gallery.” 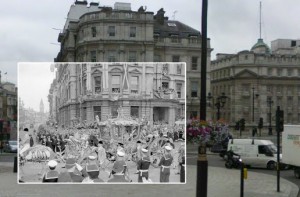 Historypin was created by We Are What We Do, a slightly nebulous not-for-profit organization based in London and San Francisco that “creates ways for millions of people to do more small, good things.”

“We’d like to collect as many contributions as possible, from individuals and archives all around the world, to help tell the rich history of these visits and celebrations,” reads a Historypin page that outlines the Jubilee project.

Though Elizabeth II’s accession took place on February 7, 1952, the coronation was scheduled for June 2 of the following year. The Diamond Jubilee – which marks Elizabeth II’s status as the second-longest reigning monarch in the history of the United Kingdom – will be commemorated during a number of events in 2012, including public celebrations and a call for increased support for charitable causes.

The British royal family has little formal political power, but they have retained general popularity in spite of criticism. Officials in the United Kingdom have called for some degree of moderation in the celebrations, citing the difficult economic situation in the European Union and abroad.

The partnership may be a calculated move by Google to demonstrate the possibilities of geospatial tagging in advance of the suspected upcoming release of a glasses-like HUD device during the next year.