Home > Blog > Look And Donate Like Your Favorite Star With YouCeleb 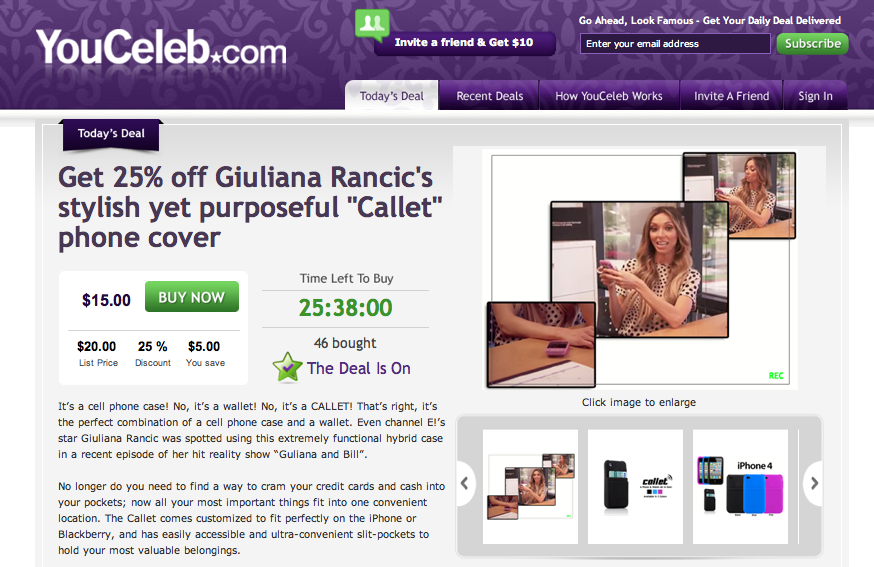 Look And Donate Like Your Favorite Star With YouCeleb

Everyday people browse the Internet and magazines looking to emulate the style of their favorite celebrities. Entire websites are devoted to identifying what celebrities are wearing and where to get that exact item or at the very least, a cheaper lookalike. But how about taking it one step further and having a Groupon-like place where proceeds from the sale go to the celeb’s charity of choice? Miami-based YouCeleb does just that.

Founder and CEO Amit Dharmani came up with the idea for YouCeleb after tracking down a pair of sunglasses worn by NBA star Kobe Bryant. After researching for hours, Dharmani went to the local Sunglass Hut and purchased the glasses at retail price. And it had to be those specific glasses, not the 30 other pairs identical to the pair purchased, showing just how much celebrities can influence style, said Dharmani.

With so many websites offering similar information on where to get items worn by celebrities, Dharmani sees an advantage with YouCeleb. “Multiple companies are doing something similar with ad overlays on images,” said Dharmani. “There are other ways of identification. There are a lot of holes and there is no celebrity involvement. Sometimes it’s a third party identifying the item and it could be identified wrong.”

YouCeleb works directly with celebrities and brands to get deals and charitable organizations on board. Dharmani and CTO John Cattaneo, based in Miami, work with a celebrity VIP team based in Los Angeles, a public relations and social media team in Chicago and developers in India. YouCeleb is bootstrapped by Dharmani. After graduating from the Incubate Miami program, Dharmani said he had several conversations with interested investors but decided to stay bootstrapped as long as possible in order to “keep control” and grow more.
Revenue has been steady and YouCeleb will continue to build as they expand into offering both more quantity and diversity of deals throughout August.

“Stream is nice, we have basically been able to continue keeping everything and operations going,” said Dharmani. “In every start-up, everything you do is scrutinized. Is it worth spending money on? Don’t blow money and be conservative with the approach. We really went strong in June with deals, going for four straight weeks with good deals.”

According to Dharmani, most of the work starts with brands who already have a database of celebrities wearing their items.  The charity comes on also to give buyers a sense of social responsibility, not just wanting to be or emulate the celebrity.

With about 50,000 users, YouCeleb will expand to offer more deals and grow relationships with more celebrities and brands. New features, such as having a well-known celebrity stylist featured every Monday on the site, will hopefully increase users and revenue, said Dharmani.