Entrepreneurs â€“ Are You Ready to Get Your Lean Startup On?

Saturday was the deadline for registering your start-up or idea for the Chicago Lean Startup Challenge. The challenge runs from October 1 through December 8 with winners announced at the Chicago Lean Startup Circle meetup on December 16. Winners will receive more than $75,000 in cash and prizes including at least $25,000 in cash. The organizers are still lining up sponsors and the goal is to have the cash and prize exceed $100,000 so these numbers are likely to increase. You can see the non-cash prizes here.

Ninety-four startups have registered through Friday, six short of the organizers goal of 100 entrants. The registration process is simple and doesn’t require you to provide extensive information about your business or idea since this competition is focused on cultivating new ideas and businesses that are in the early stages of development. The basic rules are that a startup cannot have:

Some specific types of ventures are also excluded, so check out that list on the web site.

What is the Lean Startup Challenge?

The competition is the brainchild of the folks that organize the Chicago Lean Startup Circle meetups, including Bernhard Kappe, Todd Wyder, Neal Sales-Griffin and Mike McGee. The challenge was born during TechWeek and influenced by Steve Blank‘s blog post about The International Business Model Competition and The Lean Startup Challenge that took place in Boston earlier this summer. An excerpt from the web site sums it up this way, “The Chicago Lean Startup Challenge is based on “The Lean Startup” by Eric Ries, customer development by Steve Blank and the business model canvas by Alexander Osterwalder.”

The Lean Startup Challenge is not a business plan competition.

It’s also not a hackathon and it’s not a startup weekend. 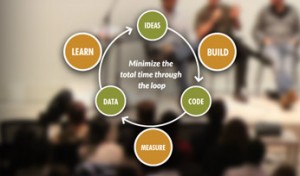 This is a competition that requires teams to iterate on their ideas over a period of several weeks. The process follows the lean startup methodology which is based on 5 principles:

By following the methodology, startups will go from idea to minimum viable product through the course of the challenge.  Progress will include iterative changes based on customer and mentor feedback. Registration includes access during the challenge to LeanLaunch Pad so teams can document their weekly activity and progress. There will also be monthly meetups for drinks and possibly a guest speaker. These meetups will give the teams a chance to interact socially and talk about their businesses. There will be regular reporting about the challenge on the Lean Startup Challenge blog and on Built in Chicago.

Tech.li is a media sponsor and we will be covering the challenge so check back with us for updates every few weeks. To quote Bernhard Kappe — “This is a challenge to actually start a business. So seize the day and start doing it!”

Thanks for info but it would be great to learn about startup events like this before registration deadlines!