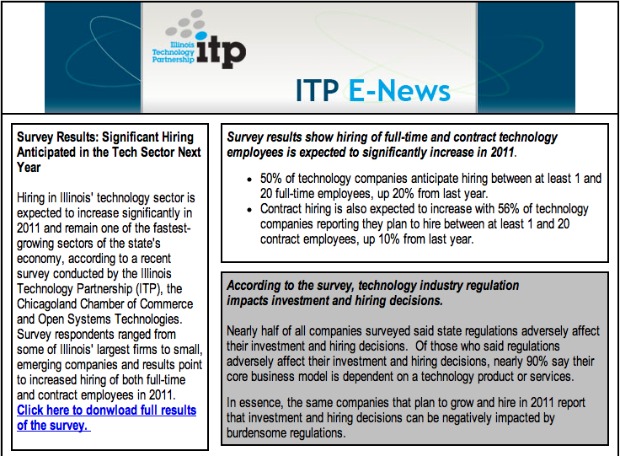 By Lindsay Mosher, head of the Illinois Technology Partnership

Click here to view the full results of the survey: Jobs Survey Results

CHICAGO, December 7, 2010 — Hiring in Illinois’ technology sector is expected to increase significantly in 2011 and remain one of the fastest-growing sectors of the state’s economy, according to a recent survey conducted by the Illinois Technology Partnership (ITP), the Chicagoland Chamber of Commerce and Open Systems Technologies. Survey respondents ranged from some of Illinois’ largest firms to small, emerging companies and results point to increased hiring of both full-time and contract employees in 2011.

“Technology companies are growing and many are planning major external investments which will trigger hiring, not only for technology jobs, but for jobs in sales, marketing, administration and others to support this growth,” said Lindsay Mosher, executive director of ITP. “These investments will have a positive impact on Illinois’ overall economy and act as a leading indicator of growth because an increasing number of Illinois companies have come to rely on technology for productivity growth.“

Planned investments that will have a positive impact for Illinois consumers in 2011 include investments in broadband, smart grid, network operations centers and wireless infrastructure. These investments are anticipated to directly create jobs in areas including mobile and wireless technology, construction, engineering, information technology, administration and sales.

“It’s a good sign when we see the number of projects increasing and the talent pool decreasing,” said Jason Hinton at Open Systems Technologies. “Companies must now move forward on long overdue technology projects, IT professionals are seeing that their skill sets are in greater demand, and this type of activity in the marketplace wasn’t happening a year ago.”

Innovative state policies, such as the modernization of Illinois’ telecommunications policies enacted last session, can be credited for helping to incentivize these investments in new technologies that create jobs and spark economic growth; but
it’s important to note that state regulations can also negatively impact companies’ strategic growth and investment decisions. Nearly half of all companies surveyed said state regulations adversely affect their investment and hiring decisions. Of those who said regulations adversely affect their investment and hiring decisions, nearly 90% say their core business model is dependent on a technology product or services.

“Encouraging private sector growth and investment through smart public policy is critical to jump-starting our economy,” said Jerry Roper, president and CEO of the Chicagoland Chamber of Commerce. “The results of this survey show that technology companies anticipate significant growth, and we must ensure regulations don’t hinder but rather they support this growth.”

Next week, ITP will be release its second quarterly broadband and wireless investment tracker, which quantifies jobs that could be created as a result of increased investment in high-speed Internet.

Click here to view the full results of the survey: Jobs Survey Results 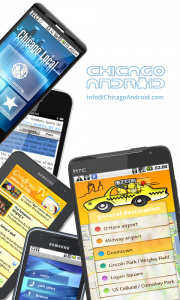 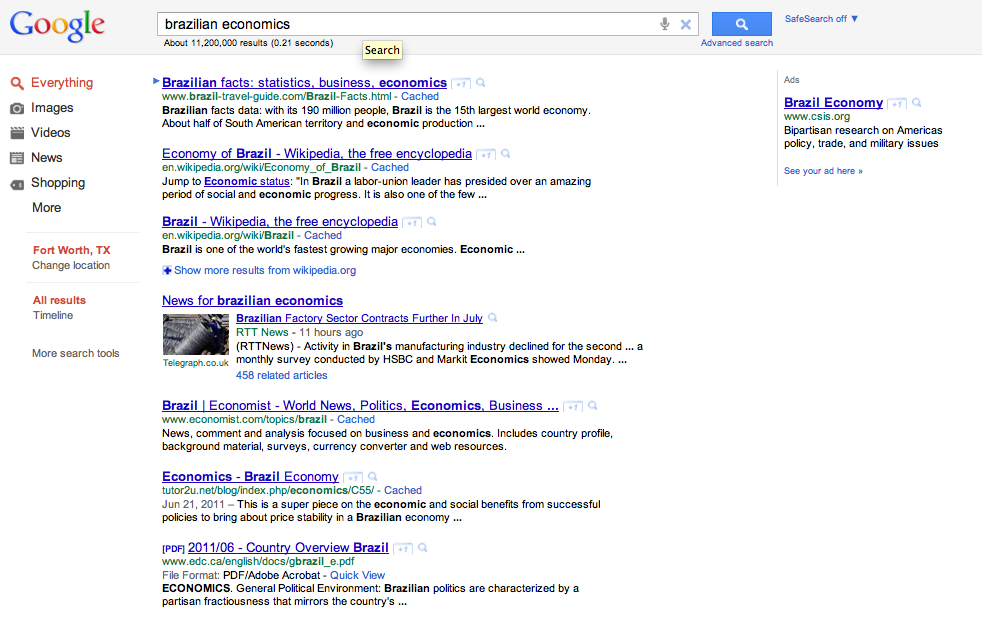 Google’s Algorithm is Outdated in the Age of Social