Politicians are known for having catchy campaign slogans and accusatory commercials, but they aren’t often known for having impeccable web design. Champaign-Urbana startup Instarta set out to correct this problem in November 2008, but shifted its focus to address a local politician’s need for an effective text message polling system.

September 2009 marked the company’s shift from a web design focus to a focus on polling. The Instarta program taps into politicians’ mailing lists to send mass text message polls.

Most politicians use these mailing lists to send progress updates to their constituencies, but Ryan Shin, Instarta founder along with Ryan Zotti, explained that this is not always the best method.

Shin noted that e-mails are often too lengthy to effectively convey information, and that most recipients don’t take the time to respond to them. Text message polling offers a solution to these problems.

“People always carry their cellphones [so they respond more quickly],” Shin said. “The information is also sent in smaller chunks, so it is easier to digest.”

Text messages, according research done by the Nielsen Communications group, are read within one hour of being received 83 percent of the time. 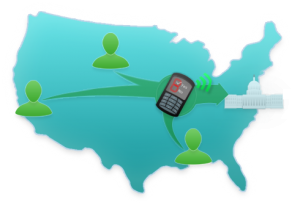 There are two ways to get started with Instarta — as a poll administer or as a voter. A politician or group leader may send out a link to follow his or her policies on Instarta. From there, users who are signed up as voters can opt into receiving text message polls from that poll administer. Voters can also select poll administers to follow without being invited by them.

But Instarta is not just a service for relaying text messages; it also has an analysis feature. Shin explained that sometimes, a simple majority vote does not convey enough information.

“If the majority of people who said yes are over 50-years-old, then it means the policy was not the best for people under 50,” Shin said. “With our analysis feature, they can customize the demographics to their responses. It not only gathers data from people. It gathers the exact information they want.”

Shin and Zotti contacted numerous political organizations, such as the College Republicans National Convention and the College Democrats of America, to assess the organizations’ need for Instarta. The Instarta team received a largely positive response.

Groups were able to poll their members easily, allowing them to promote policies and candidates that match their members’ interests, Shin explained.

And Instarta hasn’t  been picked up purely by political groups. Philadelphia Youth Committee Head Jordan Harris has successfully adopted the technology, and Shin is currently negotiating the use of Instarta with students in South Korea.

“Students don’t have the right method to organize their [opinions about] the tuition problem,” he said. “It is my hope that Instarta can help them do this more successfully.”

Though the Instarta team has already gotten a six-figure buyout offer from a noted polling company, it has chosen to retain ownership of the business. With the 2012 elections quickly approaching, the Instarta team will have many opportunities for growth and increased exposure — both to politicians and the population at large.