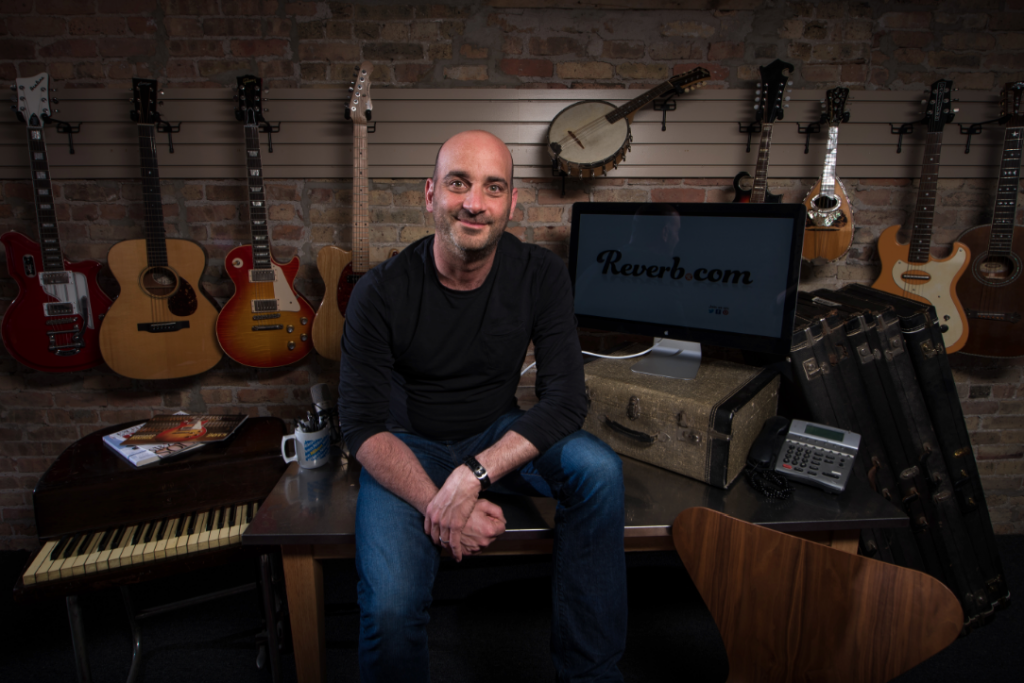 Serial entrepreneur David Kalt recently launched his newest startup, Reverb.com, after founding ClientBASE, the first CRM for the travel industry, and then optionsXpress, an online broker that sold to Charles Schwab in 2011 for more than $1 billion.

While these three ventures seem vastly different, there are things that pull them together for Kalt, making him a successful entrepreneur across industries.

What do programming, finance and music have in common? Kalt said the connection seemed obvious. “Most people don’t connect the dots as easily,” he said.

There’s a relationship between music and technology, Kalt said. And the math component that exists in both music and programming also exists in finance.

“It’s a big puzzle,” he said, whether it’s about understanding algorithms and how financial markets work or about finding the right meters in music. He said all three disciplines — finance, music and programming — are about finding how the pieces fit together.

“I look at those three disciplines as something that requires serious pursuit and real challenges.” And he said the answer lies in building great products with technology that are easy to use.

Kalt “wandered” from music to programming after working in a recording studio in the early 90s. Though he studied political science during his undergrad at University of Michigan, he got his master’s in computer programming and began developing software. His family owned a travel agency, so it was a natural progression toward developing ClientBASE.

And optionsXpress was another natural progression. He picked up options trading as a hobby, and was frustrated with existing trading platforms such as E*Trade, and strove to create a “level of detail and innovation that the product [deserved],” Kalt said.

“Once I actually understood how to build stuff, I understood you can build companies,” he said, which he said started with:

“I figured out what I’m good at and how to empower others and hire good managers,” he said, adding that to continue to succeed, you must recognize your own skills, and who you need to surround yourself with.

For Kalt, the other connection between music, programming and finance was that his personality was genuinely drawn to each of the three.

“I see a lot of people building businesses and pitching businesses to me but it’s not genuine or rooted in real experience,” he said.

All three of Kalt’s companies were rooted in his genuine interest and curiosity for the industry and the programs and solutions he developed. But it’s more than that, he said. With each company, it’s about figuring out your core.

A lot of companies begin to lose sight of their core as they grow, Kalt said. Companies like Google, Pandora, Spotify and EBay begin to dilute as they cover more ground.

Kalt said he began to lose sight of the core of optionsXpress as the company grew. He stepped down as CEO in 2007, when the job for him became “a lot less about the product and a lot more about the quarterly earnings,” he said, adding that at this point the company struggled to innovate.

After playing a number of roles in a number of companies, Kalt said at the end of the day he’s “way more of a startup guy than a CEO.”

He said knowing a company’s core is important, but so is knowing your own core. “I was good at taking an idea and making a team of technology guys and marketing guys.”

Making it about the customer

The extreme focus on product keeps the consumer happy, Kalt said, but there are a few more things you can do to enhance the experience. In the case of ClientBASE and optionsXpress, it was about building a product that was more user friendly than anything else out there.

But Kalt also has a knack for enhancing the customer experience in person. He has been the owner of the Chicago Music Exchange for nearly three years and has had frequent visits from celebrities such as Johnny Depp, Tom Petty and Brad Paisley. Kalt more than doubled revenues of the 17-year-old store since he took the reigns.

He said it’s the way the store creates an experience, and realizing that nothing can replace the value of experience, Kalt created his newest venture – Reverb.com.

Reverb is a marketplace for guitars – serving the place of guitar shows, bringing vintage, used and handmade guitars to customers without them having to travel the country.

It came out of the inefficiencies of marketplaces such as Ebay and Craigslist. Like many other companies, the two had spread so thin that they could no longer provide personalized customer service. There were holes in the product just because the products were covering too much ground.

Kalt returned to an industry he loved, which turns out to be a $3 – $5 billion marketplace. “Music is a big part of a lot of people’s lives,” Kalt said, whether it’s for hobby or profession.

“Guitar schools and music stores were what apple stores are today,” he said, and it’s because at the music store, the customer has the opportunity to try new things and have an expert show the customer the potential of new products.

Now, through careful curation of products, photos and videos, Kalt is bringing the experience online.

“A lot of our sellers use video to better articulate the sound of an instrument and the three dimensionality” to experience the product.

He said his customers are showing they are more comfortable with selling more expensive products through the marketplace, and his buyers are more comfortable in investing in higher price tags. Reverb.com has been up and running since earlier this year and is already processing hundreds of thousands of dollars in deals each month, and growing 40-50%/month.

Kalt said he was looking to hire developers and more people to market the site, as well as strategic investors to continue to expand.

And from his experience building companies, Kalt said he knows the journey of innovation isn’t over. He said he not only works to make his customers more comfortable with the site, but also works to learn from his employees.

“Even though I understand technology and I understand big picture on how to build things… staying innovative and staying fresh is listening to the next generation.”