About halfway down the infographic we recently posted 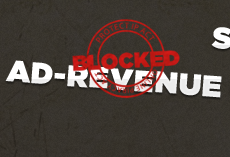 on the pending Stop Online Piracy Act (SOPA), you’ll see the image to your right. Not only does SOPA affect site owners, users, and perspective online startups; it restricts the ability for advertisers to continue footing the bill for a free and open web. This will have a detrimental impact on an otherwise booming online advertising marketplace. In the first half of this year alone, online advertising attracted $15 billion dollars in advertising revenue (IAB), and sans SOPA, is slated to reach $50 billion by 2015 (eMarketer). In this volatile economy, we simply cannot afford to limit this growth.

Even though online advertising is no longer considered a new medium, many advertisers still do not grasp the fine details of how it works and are often beleaguered by it’s nuances. Partly, this is due to a generational gap. As an industry we’ve made significant advances in the understanding of the medium over the past few years — SOPA will change much of that. SOPA has the potential to turn online advertising on it’s head, and force advertisers to “take their money elsewhere.” Allow me to illustrate a couple major reasons why:

False positives — it’s a fact that advertisers do not want to be associated with copyright-infringing content. Those that buy or sell online advertising can attest to this fact, and a lot of work is done to separate the two (it’s part of the reason companies like Double Verify even exist). It is unfortunate that a very likely (and common) effect that SOPA will cause is that many sites will be shut down due to false positives. While there will be an eventual investigation that would prove the site’s innocence, this will push advertisers to take a “better safe than sorry” approach and shy away from advertising on sites that incur any sort of temporary shutdown and/or investigation.

Delivery guarantees — there’s a dirty word in the advertising world, one that causes both buyers and sellers to cringe. That word is “makegood.” For those that are unfamiliar, this is what happens when a publisher is unable to deliver in full on a contract (for instance, a guaranteed number of online impressions). When this happens, the publisher must “make it good” for the advertiser with either a cash credit, or by offering even more ad inventory that was initially contracted. Can you imagine what will happen when sites are temporarily being shut down on a regular basis or when sites are blocked from running their clients’ advertisements? Impression guarantees will be nearly impossible to keep, and SOPA will turn online advertising into an unstable, grossly inefficient business for everyone involved.

While much of what the future holds is speculation at this point, it’s clear that SOPA will bring online advertising back to the days where it was considered the “wild, wild west.” Fear, uncertainty, and doubt (FUD) will be a direct result of SOPA, and it’s one that will scare many advertisers to stick with the mediums they understand and know to be free of complication (TV, Print, Billboards, etc.). If we want to preserve a flourishing online economy, we need to take a stand against SOPA. Visit americancensorship.org to learn more.