I recently read an article titled, “Technology is the New Smoking”. As in, the new socially acceptable addiction most likely to interrupt your 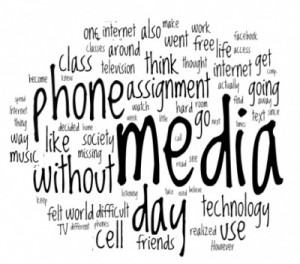 conversation repeatedly throughout an evening, especially now that most municipalities consider tobacco to be passÃ©.

That technology has collectively become an addiction is not really in dispute. A global study, led by the University of Maryland, and amateur studies of one’s own social group seem to agree — we are addicted to media technology. We sit at work with our smart phones on our desks. My phone isn’t even all that smart and there it sits, its red light blinking at me, “Text message. Text message. Read me.” I went to a wedding shower two weeks ago and the ratio of smart phone photographers to camera photographers was easily 2:1 — my photos still languish on my camera and theirs were online by the end of the day. I never sit down at home without my laptop or Kindle — and my phone, as it’s pretty much an extension of a person’s body at this point, it’s presence is a given.

I am an addict.

The article I read ended with the thought that though there are concerns out there about the cancer-causing effects of cell phone use, they are as yet unproven, and in the meantime Googling those factoids remains healthier than inhaling known carcinogens.

I would dispute that.

It used to be that we could agree to disagree amicably and move on. Now someone has to be right. I spent 20 minutes the other night looking up a line from The Big Lebowski because my husband and I disagreed on how many days late The Dude was with his rent. For the record, it was 10 days late and we were both wrong. The answer didn’t matter though, neither did the argument, but I spent 20 minutes of my life on finding the answer instead of moving on. We will, in the average 70 year lifetime, spend just under 7 years of our lives eating (roughly 59,130 hours) and only two weeks (roughly 336 hours) kissing. In December 2009 we were spending 5.58 hours a month on social networking sites. For a 15- year old, that means they stand to lose 3,682 hours (roughly 5 months) of their lifetime to just social networking sites. How many years will I use looking up stuff that doesn’t matter?

For those who argue that media technology addiction isn’t harmful, there are plenty of stories out there to prove otherwise. This guy became so involved in his gaming he neglected himself and died. This woman neglected her child, who died. This person got fired because they complained about their job on Facebook. Here’s a post on how to avoid getting divorced because of Facebook. The National Safety Council estimatesthat at least 1.6 million accidents happen each year due to drivers texting and talking on their phones. Or, look at the blog postings by the student participants in the University of Maryland’s Unplugged study — on the study website they are broken down into emotional responses like boredom, confusion, distress and isolation.

Other comments give me heart. The final emotional category was the Benefits of Unplugging. The comments range there from rediscovering life’s simple pleasures to appreciating the silence.

Now, I don’t propose to go back to the time of the pioneers or anything crazy. I’m not saying that technology is an awful, terrible beast sucking away our souls. I think media technology is the bee’s knees and it makes my life so much more interesting. I appreciate knowing via Yelp that a restaurant I was considering has a habit of unsavory hygiene practices. I love being able to Skype with far off family and keep up with our friend in Dublin. I like being able to see the same news story from several perspectives. I like drinking cocktails too, but that doesn’t mean it’s okay for me to binge drink on a daily basis. So why is it increasingly acceptable to binge on digital technology to the point we’re Tweeting instead of talking to the person in front of us? Moderation is required.

With any addiction, recognizing you have a problem is often the first step of recovery. Then there are the baby steps of recovery. 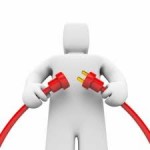 I have a problem.

So tonight my husband and I are going to eat dinner at the dinner table — not on the sofa. We’re going to talk about our days and the weekend — not surf the web. Phones will have to ring, beep and chime on their own for a little while. Our fingers might twitch and we may be composing a running feed in our heads, but for a few minutes we’ll be leash free.

It’s only 30 minutes of media darkness, but it’s a start.