On Tuesday, Google confirmed rumors that the company has been working on an online storage system similar to Dropbox, and launched the service to some users. Like Dropbox, Google Drive offers a modest quantity of free storage – 5GB to Dropbox’s 2GB – with more data available for a monthly fee. 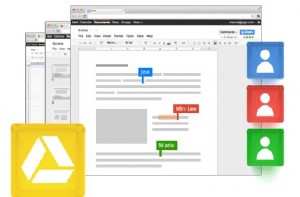 Google senior vice president of Chrome and Apps Sundar Pichai called Drive “a place where you can create, share, collaborate, and keep all of your stuff. Whether you’re working with a friend on a joint research project, planning a wedding with your fiancÃ© or tracking a budget with roommates, you can do it in Drive.”

Google Drive is available immediately to some Google users, while others can ask to be placed on a waitlist.

Google spokespersons – no surprise here – are playing up Drive’s social component, in line with the company’s tremendous social networking push based around Google Plus.

“It’s less about you storing data, than about creating and collaborating,” Pichai told the New York Times. “Data storage happens on the way.”

Buffing that social component, the company is also working with third-party developers to create apps that extend Drive’s functionality – including, according to Pichai, support for sending faxes, and editing video and website mockups. Drive also has advanced search functionality, including handwriting recognition for scanned documents. The service also supports screen readers for users who are visually impaired.

To Google’s credit, it also appears to be focusing on the basics: Solid integration with Google Docs, YouTube, and other pre-existing services.

In the Google Drive announcement, Pichai riffed on the swirling rumors that Google has been working on a Dropbox-like service. “Just like the Loch Ness Monster, you may have heard the rumors about Google Drive,” he wrote. “It turns out, one of the two actually does exist.”

The app is available for Windows, OSX and Android, with an iOS version in development. Unlike Dropbox, a Google Drive app is not available for Linux at this time.