From Airbnb to Zaarly: A Short History of Collaborative Consumption Startups

I was born in the 1980’s. It was the decade in which Gordon Gekko proclaimed, “greed is good!”, teens were mallrats, and shoulder pads helped ring in the decade of the power woman. Community was put on the back burner as individual successes became the marker by which economic strength was judged. There’s a reason why the children of the late 80’s are called the “Me Generation”.

Although the 90’s ushered in the DIY ethos of the slacker generation, the economy was still buzzing along. Wearing secondhand clothing was less about necessity and more about looking like your favorite Seattle guitarist. Borrowing your neighbor’s bike or trading a case of beer for a home project wasn’t formalized via a marketplace. All you had to do was call up your buddy on a (shocker!) landline and the deal was done.

Everything changed with the global economic collapse of 2008. Young people who had been raised in a future of unprecedented abundace suddenly couldn’t find jobs, afford first houses, or score funding for their businesses. Even almost 4 years later, aftershocks from the crumbling economy continue to impact market places, and not in a negative way.   The global economic collapse has allowed for a new economic model called collaborative consumption to take hold and dominate in the startup world. 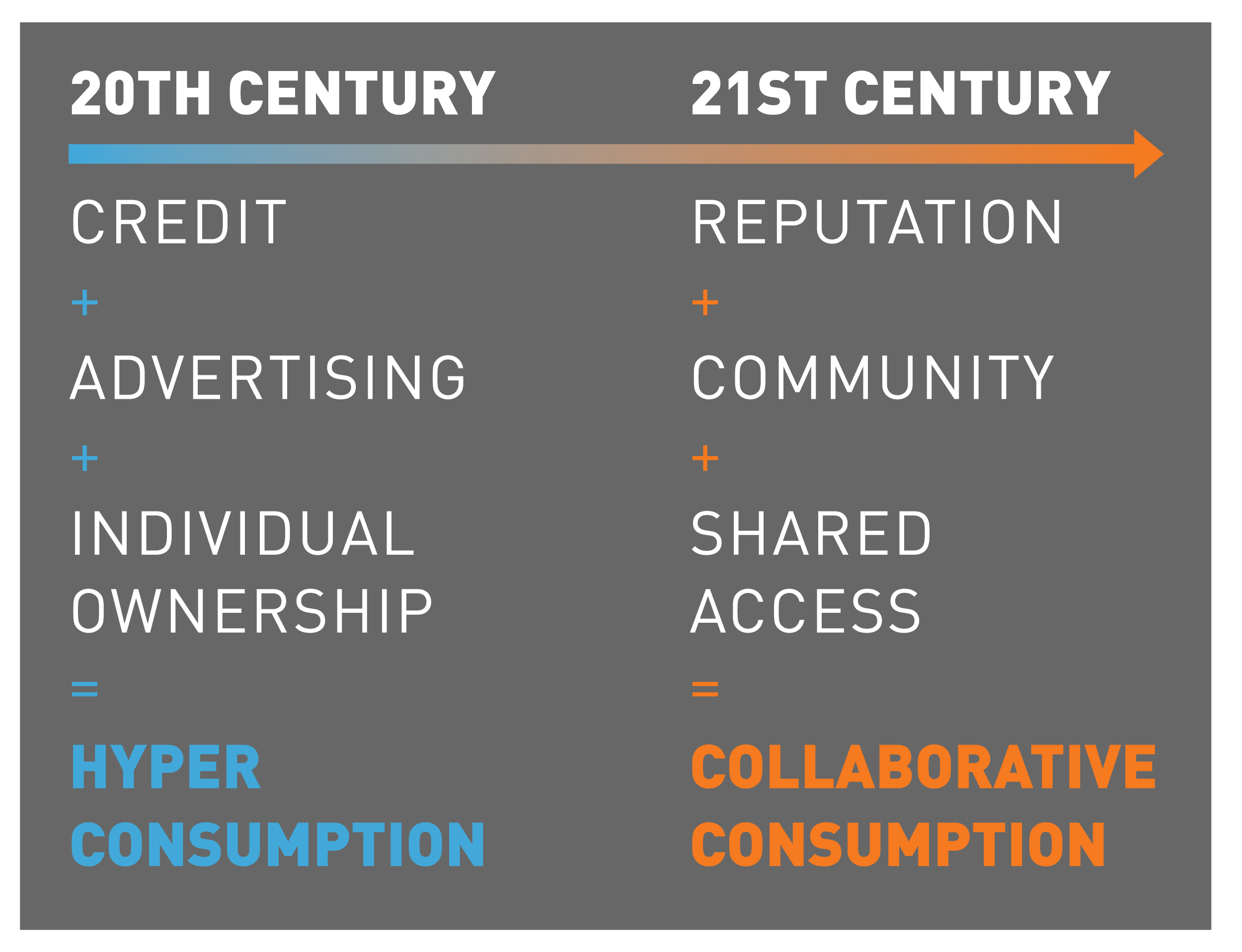 What is collaborative consumption?

Collaborative consumption is the act of sharing, bartering, swapping, or reusing good and services. Although analog examples of collaborative consumption like brick and mortar resale shops are reasonably successful, digital marketplaces are blowing up thanks to the network effects of social media. After all, internet culture is fundamentally about sharing. Whether people are sharing music files, wifi, or information about themselves, user behavior on the web revolves around common experiences.

According to Rachel Botsman and Roo Rogers, authors of the book What’s Mine Is Yours: The Rise of Collaborative Consumption, there are three categories of collaborative consumption:

1. Product-service systems enable products like DVDs, cars, books or homes to be rented;

2. Redistribution markets are exchanges for used items including clothing;

Since the dawn of the internet, marketplaces for sharing have transformed the way we do business with each other as friends and neighbors. This timeline shows the evolution of collaborative consumption marketplaces:

Craigslist was founded in San Francisco by Craig Newmark as a Bay area events email list.

Casey Fenton conceives the idea for CouchSurfing after finding a place to crash after a random Boston to Iceland flight.   Fenton emailed 1,500 students at the University of Iceland asking for a couch to sleep on and he received 50 responses.

The first ZipCars hit the streets of Boston thanks to cofounders Antje Danielson and Robin Chase. ZipCar was based on an existing European business model.

The global economic crisis shakes citizens across the world as credit dries up and the fate of the modern banking system is uncertain.

The “Netflix for handbags” startup Bag Borrow or Steal makes an appearance in the Sex and The City movie thanks to Carrie’s assistant Louise, played by Jennifer Hudson.

Recycled Bride is founded in Santa Monica by artist Tracy DiNunzio. Cashing in on the recessionista trend, Recycled Bride connects buyers and sellers of gently used wedding attire and accessories.

Leah Busque founds TaskRabbit, a hyperlocal marketplace for neighbors to buy and sell tasks after realizing late one night that her dog ran out of food. Leah thought about how great it would be if she could pay someone to purchase and deliver the dog food for a fee. Thus the idea for TaskRabbit (formerly RunMyErrand) was born.

Harvard Business School classmates Jennifer Hyman and Jennifer Fleiss rent out dresses from their closets to test a formal dress rental idea. The test was so popular that the duo founded Rent the Runway, a service for women to rent stylish designer gowns for events.

New York based LooseCubes, a marketplace for sharing office space, is founded by Campbell Mckellar upon returning to New York after spending the summer working in Maine.

Peer-to-peer car sharing marketplace Getaround wins Techcrunch Disrupt and scores a $50,000 check after dazzling the judges panel with their pitch.

An Airbnb host claims that her apartment was turned into a meth lab and that her identity was stolen after renting on Airbnb.  The incident highlighted the safety implications of peer-to-peer marketplaces and now is held up as a cautionary tale of collaborative consumption gone wrong.

CouchSurfing ends its non-profit status and raises $7.6 millon to become a corporation. There is an early backlash from longtime users.

To date, more than 50 million people in the US alone have used craigslist, which currently gets 30 billion page views per month.

ZipCar had 650,000 members and cars in 28 North American states and provinces.

What are the main concerns with the collaborative consumption business model?

Although the timeline shows just how successful the this new business model is, there are still key concerns that need to be addressed if the future of collaborative consumption is going to grow to contend with traditional markets:

What is the future outlook for collaborative consumption marketplaces?

Have you used a collaborative consumption startup? If so, which one?

Nice summary of Collaborative Consumption Kathryn! It will be awesome to see the movement explode into the mainstream during the next 5 years.
As a founder of a CC business I completely agree with the three challenges you listed, each new marketplace will need to find unique ways to address these.
For anyone looking to earn some extra income from power tools or save money renting them check out ToolSpinner.
http://www.ToolSpinner.com

Thanks Daniel! According to my research, you’re industry isÂ definitely going mainstream in a few years. It’s great to see sharing step outside of the green movement into everyday life. Â Â

Thanks for the chronological list of Collaborative Consumption and the risks involved. With our app Locally we currently connect neighbors & locals to socialize, mobilize & organize in their neighborhoods.Â

Thanks for all the tips.

Thanks for checking it out! I’ll search for Locally in the app store.Â

Great overview of #Collcons space and this sharing economy. I enjoyed the timeline and reading Sam Rosen’s thoughts on trust and reputations with these business models. Thanks for this great article.Â

Fun2Rent.com is a peer-to-peer rental site for boats, jet skis, ATV’s and more. We have integrated facebook and our team is also looking for other ways to increase trust as we grow our platform. Trust, security and reputation are very important.Â

Love Zaarly and TaskRabbit concept- WeGoLook.com also is a great resource for
nationwide tasking and reporting. 7,000 agents are dispatched on an
individual’s or company’s behalf to perform custom tasking, dynamic
data capture and personalized report templates on virtually any item
(eBay), auto, property, asset and even online dates

Check out this site of collaborative consumption. The BuscaLÃ¡ http://www.buscala.com.br in Brazil