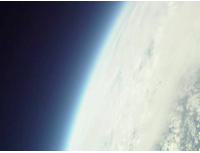 Father son team Luke Geissbuhler and his son Max from Brooklyn, New York, wanted to do a fun project together involving outer space and ended up capturing incredible video of the stratosphere at 100,000 feet.

New York Magazine reports that Luke and his son spent 8 months researching the project before they launched their own space voyager form Newburgh, NY.

The craft rose to 100,000 feet before the helium in the balloon expanded too much due to lack of pressure and burst, sending their space craft down to earth via parachute where it landed 50 feet up in a tree. The father/son team was able to retrieve their gear thanks to the iPhones GPS capabilities and an LED they put in the craft to aid them in finding it when it came back to earth.

This video is incredible— enjoy!