The new feature set, which will appear first on messenger-only mobile apps and eventually work its way to the Facebook website, introduces a “read receipt” to messages sent over the site’s instant messenger service. That is, you’ll be able to see who has read messages that you’ve sent – and, by process of elimination, who’s received your messages without reading them and who’s read the note but can’t be bothered to write back. Oh, and if it’s available, it says where the message was sent from.

All that information on your Facebook pals, critics might charge, is a long shot from the tone the company took when they launched the site’s chat feature.

“Before we jump head-first into this new real-time approach to Facebook, it’s worth spending some time thinking about privacy,” wrote engineering lead Josh Wiseman when the original Facebook chat was launched. “Conversations are one-to-one, completely private, and only between Facebook friends. The message history is saved from page to page, and even between login sessions, but it is not logged permanently. Should you wish to clear out the history immediately, there’s a link provided in each conversation to do so.” 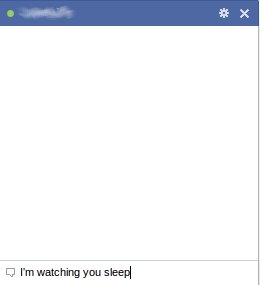 It’s a seemingly off-kilter move for the social network, which bolstered its image this past week in advance of its upcoming IPO by encouraging users to share their organ donor status (though enigmatic company CEO Mark Zuckerberg was lampooned for delaying in updating his own profile.)

But it’s envelope-pushing, which is important for a site modeled after predecessors that have died of stagnation.

“SMS has been around for 20 years, but it was built for these T9 phones,” Facebook Director of Product Peter Deng told TechCrunch. “We’re focused on leveraging all the capabilities of today’s devices to create a new messaging experience.”

Facebook’s glitchy chat feature has undergone a number of upgrades since its inception in 2008, including integration with SMS. Still, AppAdvice’s Aldrin Calimlim pointed out the obvious: video chat is still patchy, and nonexistent on mobile apps — a void that competitor Google smoothly filled with the Hangouts feature on Google Plus.