Drones are delivering contraband over prison walls in Michigan

For the second time in just a week, a drone has been used to airdrop contraband into a Michigan prison.

Reportedly, the August 17th drop consisted of three mobile phones, razors and marijuana at the Richard A. Handlon Correctional Facility. The culprits were caught and arrested at the scene.

On August 11th, workers at the Carson City facility found multiple packages containing mobile phones and drugs. It was only after reviewing video footage that they discovered drones were responsible.

Officers have reason to believe both operations were undertaken by the same culprits.

Prison and drone experts say these incidents are becoming increasingly common. Two years ago, Mansfield Correctional Institution experienced a riot when a drone ended up within the perimeter. Its cargo included tobacco, marijuana, and heroin.

Another case was recorded in Maryland last year when a former inmate and prisoner were convicted of delivering contraband during several night time product drops that totalled six thousand dollars.

And then there’s the South Carolina inmate’s escape with wire-cutters which it is speculated he obtained from a drone drop.

This kind of technology is clearly a problem for law enforcement and prison officers all over the country, and so they are looking into methods to stop it spreading.

One suggestion has been to simply shoot the drones out of the air. However, this would only really work if the shooter is the real-world embodiment of Deadshot. Prison guards tend to only carry around shotguns – those guns with an infamously short range and low accuracy.

Couple this idea with the fact that the drone drops happen at night, with the lowest visibility [of course, only an idiot would try flying a drone into a prison in broad daylight]. Prison workers are also overworked and prisons understaffed; expecting them to be able to spot the slight humming of an incoming drone in the dead of night is, well, foolish.

Even if this was a viable option [it isn’t], the debris caused by the resulting shot would end up all on the floor in small, sharp shards of metal and plastic. (Not exactly the sort of thing you want in a prison yard).

A more feasible idea, would be to use drone signal jamming. This would cause no debris, could be achieved from inside and require minimal manpower.

This sounds like the perfect solution, but to achieve this there would need to be a change in policy. Currently, only the federal government have the authority to jam drone signals. And according to Chris Gautz, spokesperson for Michigan Department of Corrections, at present there are no talks between the FCC and prison officials to implement this technology.

The worry is that if policy is not changed, the drone issue could escalate. At the minute, drone use seems to only be undertaken to transport luxuries good to prisoners, but it may not always stay that way.

“It likely will take a major event to prompt new policies,” Kevin Tamez, a managing partner at New Jersey-based security firm MPM, said. “When someone drops an AK-47 over a fence and they have a major riot because these guys have guns,” says Tamez, “then someone’s gonna scratch their head and say, ‘Gee wiz, maybe we should do something about this.’” 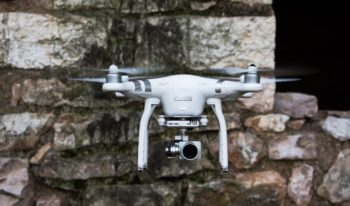 Another potential alternative has been developed by Michigan Tech Human-Interactive Robotics Lab in the form of a ‘drone net gun’.

Whilst this might sound like something out of Scooby Doo, we must consider the potential safety implications of shooting a drone out of the sky. It could potentially contain a bomb designed to explode on impact – and this could happen at political rallies, sports games, or any kind of public event.

Instead, the net captures the offending drone and ferries it to a safe location, potentially saving thousands of lives.

As of now, officials are torn on how to deal with the growing issue with drone delivery thanks to the sheer number of variables; for the time being we will have to hope that Tamez’s prediction remains just that – a prediction.