Entrepreneurs are never short on ideas, but they are often short on time. Bob Lozano, co-founder of Appistry, was in the midst of building his own venture when he saw a new business opportunity. Appistry is a platform for data-intensive computing applications, and Bob realized that credit card processing could be completed effectively on Appistry’s platform without the build-out of an expensive mainframe computing system. The high start-up costs in the payment processing industry meant that few new companies had entered the market for years, making it ripe for innovation. Not having time to start this business himself, Bob found a serial entrepreneur who had just sold his last company to Cisco, Dan Garaty, to take advantage of this opportunity in 2006. That is how Clearent was born.

Clearent is a payment processing company. Since many large payment processing companies were built on mainframe computing systems, the technology is old and cannot deliver the reporting and analytics that retailers and merchants expect in a Web 2.0 world. Clearent was able to build their own technology on top of the the Appistry computing platform to create flexible products where new innovations are possible. Clearent sells their payment processing services to Independent Sales Organizations (ISOs), community banks, and individual merchants. Some of their bank costumers include Lone Star National Bank in Texas, Armstrong Bank in Oklahoma, and Central Bancompany, a Missouri-based bank holding company which operates 13 banks with over 200 locations. Clearant has experienced 100% year over year revenue growth since inception, and currently has 32 employees. In 2010, Clearent processed $1 billion worth of transactions, and as of July 2011, they achieved $1.5 billion in annualized transaction volume. 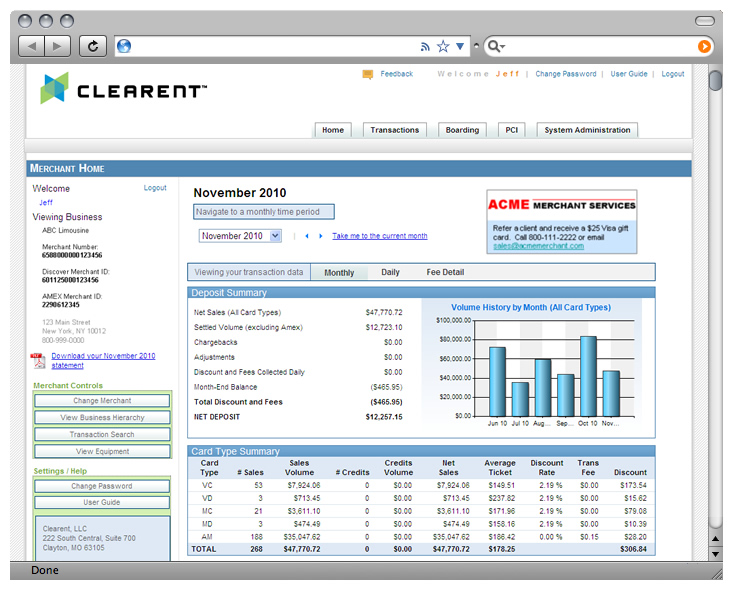 One of the secrets to Clearent’s success was to get market feedback early. When the company first started selling in 2007, they were not ready to actually start processing payments yet. They could push data through their web-based reporting and customer management systems, but they needed partners to help with the actual payment processing. By selling their products before their processing technology was ready, they were able to collect feedback from customers which was critical in helping to prioritize Clearent’s development resources, allowing them to be capital efficient. By 2009, Clearent had completed their payment processing technology and continued to attack the marketplace.

To date, Clearent has been funded by angel investors and company revenues. However, the company would not disclose how much in outside funding has been raised. Jeff Zimmerman, Clearent’s VP of Product Management and Marketing, said the company was focused on continuing their rapid growth and developing new products in the next year.

To think all this growth from an idea that one entrepreneur did not have time to pursue on his own is truly amazing.