Jane Jacobs, the urbanist and author of the iconic city commentary The Death and Life of Great American Cities, once said, “Design is people.” This philosophy of directing collaborative planning towards common goals resonates with IBM’s latest philanthropic brainchild, CityForward.org.

The computational research giant IBM unveiled its latest application to the common good at TechWeek 2012, highlighting the connections it hopes will develop as a result of CityForward between policy makers, researchers, and urban dwellers.

CityForward is a free, web-based platform where city officials, researchers, academics, and urbanites can tackle issues such as water and air quality, revitalizing green space, and inner-city crime rates. In combination with IBM’s complex research tools, the platform offers a unique collaborative space that quantifies these issues into explorable trends, patterns, and correlations. 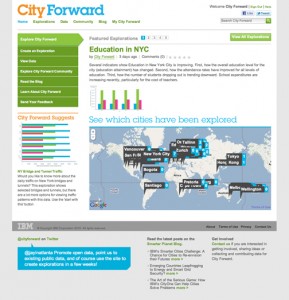 The DataStage software grabs publicly available data on the Internet into a cental database for the users to access. City Forward data encompasses metropolitan areas, cities and smaller towns that vary greatly in size and development stage.

The website offers several key features. For example, one could browse available datasets ranging from commute, crime, and GDP, to labor statistics, land area, and vital statistics. One could select from a myriad of data topics such as consumer spending, housing price index, or air quality index, and generate in real time a data visualization for a selected urban territory.

By selecting a series of buzzwords centered around data and location, one could learn about what their neighbors are doing to improve city life, and collaborate with like-minded people in the various subject-centered forums in the CityForward community.

The project’s data collection is currently underway, and any tip on publicly available, city-relevant data can be directed to the CityForward organizers.

Opinsy Is A Social Graph For Demonstrators, Revolutionaries