Chrome Has Its Day (Singular) In The Sun 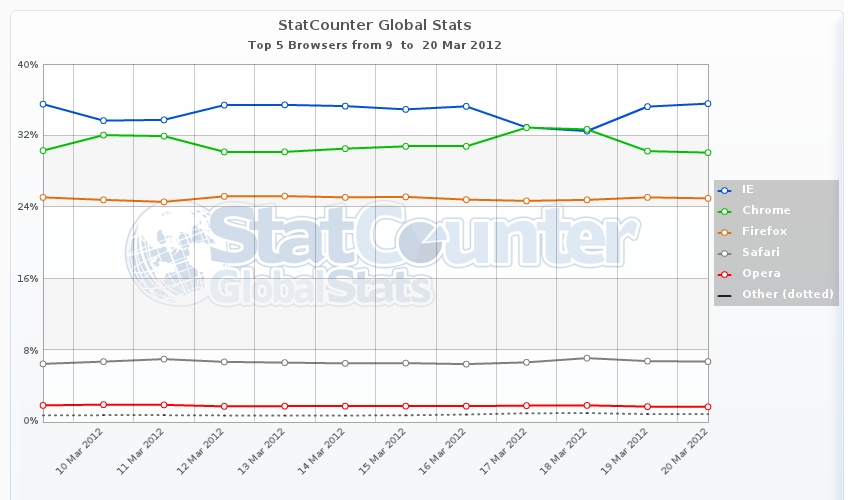 “While it is only one day, this is a milestone,” said StatCounter CEO Aodhan Cullen, in a statement.

When Chrome gains users, analysts note, it’s at the overwhelming expense of Internet Explorer. On weekends, Chrome use spikes while Internet Explorer use sinks, no doubt because of Microsoft’s dominance in workplace environments. Firefox use, by contrast, tends to hold more or less steady throughout the week.

“Whether Chrome can take the lead in the browser wars in the long term remains to be seen, however the trend towards Chrome usage at weekends is undeniable,” Cullen said. “At weekends, when people are free to choose what browser to use, many of them are selecting Chrome in preference to IE.”

Leading Chrome’s overall gains is increasing international use. Chrome now holds a lead over its rivals in China, India and Brazil, according to analysts. That’s in comparison to the United States, where Internet Explorer still holds a firm lead in spite of parrying with Chrome on weekends.

Microsoft has taken recent steps to combat Internet Explorer’s frumpy image, including releasing a jarring advert that pokes fun at perceived weaknesses of earlier versions of the browser, which a character describes as only acceptable for “downloading other browsers.” That’s in addition to the anticipated touch-screen friendly Metro interface on Microsoft’s upcoming Windows 8 operating system, which seems intended to court design-conscious users who might usually flock to Apple interfaces.

Google debuted Chrome in 2008, and it has gained users smoothly since then. The search giant has released a notebook computer, the Chromebook, which is built around the Chrome browser, and made much of the project’s source code public as the open source Chromium, which has been ported to a variety of other operating systems. 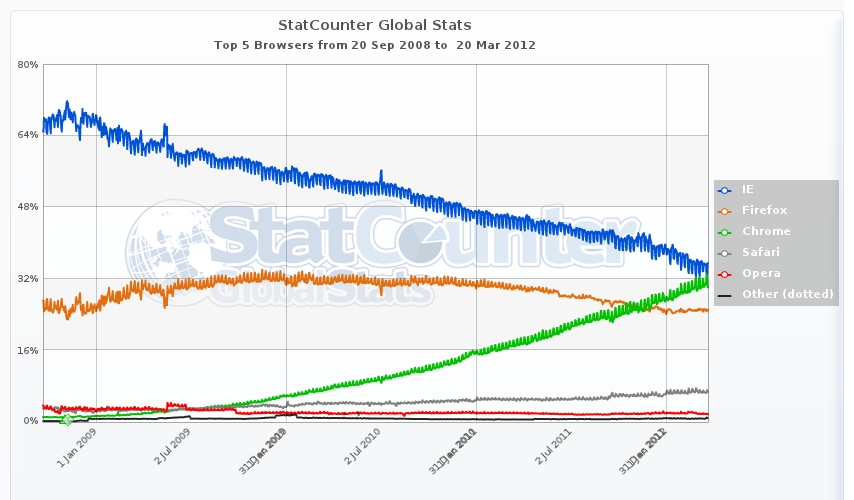 StatCounter is a web analytics service that publishes statistics on the popularity of browers, operating systems, system configurations and web sites. The service analyzes data from a pool of more than 3 million websites and 15 billion monthly page views.

I believe one day chrome will pass IE thoroughly.Chrome is NO.1 when it comes to the speed. I use chrome mainly for its fast speed.Actually I don’t like the simple appearance.I prefer some useful build-in features and buttons just like what Avant browser and maxthon do.