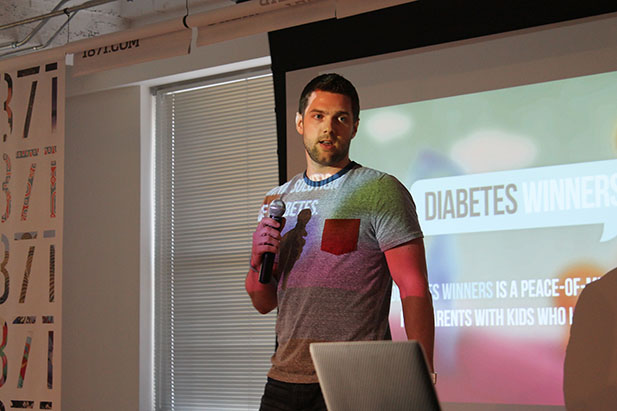 Bob Weishar, a team member of Diabetes Winners!, the team that won start-up weekend, pitches to an audience of start-up leaders, judges and attendees.

Instead of spending the weekend relaxing, 96 entrepreneurs gathered at 1871, Chicago’s start-up incubator, to build a company in less than 3 days and compete to win a series of prizes, and the approval of start-up community leaders.

“It’s more than just networking and talking, it’s about building,” said Adam Haun, one of the event coordinators. He said the event is “No talk and all action.”

This marked the eighth Chicago start-up weekend event. Haun said this event proved the event was growing with almost 100 people in attendance, 18 pitches instead of the 15 and more developed ideas. “Ideas are becoming a bit more innovative,” Haun said.

The 18 companies that pitched at the event addressed a diverse array of problems that could be solved through technology.

Diabetes Winners! took first place in the competition. The app makes it easier, and more enjoyable, for kids to track their diabetes treatment. Jill Salzman, one of the four judges and founder of The Founding Moms, said it was a unanimous decision in choosing the team. “They’re saving lives in a cool way,” she said.

Bob Weishar is one of the team members and has Type I diabetes himself, and understood the changes needed in diabetes care in relationship to the struggles diabetes patients face each day, he said in a pitch to the event attendees. Troy Henikoff, another one of the judges and managing director of TechStars Chicago, said this type of solution can translate to an array of medical problems.

In second place was Rushour, an app to get you to where you need to be in a faster, more efficient way through a series of alerts. “We solved the problem of wasting time on your commute,” said Matt Moore, one of the Rushour team members. Salzman said the team had an amazing prototype. “They knew where to take the brand,” she said.

In third place was The Ruly Mob: A company charged with helping brands communicate to customers and vice versa, aggregating “like users together to collectively & conveniently reduce their cable, internet and phone service rates,” according to the start-up weekend blog. Salzman said Ruly Mob was the “democratization of the internet to brands.”

What it takes to win: Collaboration.

The true value of the event was not in the competition. It was in the collaboration. As the teams met for the first time on Friday night, they had to learn from each other in a short amount of time. Parth Shah, a member of the Diabetes Winners! team, said success came from “meshing many ideas together into a feasible solution.”

Each company not only had to learn about teammates quickly, they learned to collaborate with all the members in the 1871 co-working space.

“I think winning last year’s event gave a lot of insight into what it takes to win,” said Jimmy Odom, founder of WeDeliver. But moreso, he said, it’s not about winning. It’s about seeing the teams grow from start to finish, and seeing teams work together.

Working together was a common theme of the night’s event. Healthify My Team, one of the companies at the event, used WeDeliver as well as other start-ups in the space to follow through with their goal of making workplaces healthier with better foods and options to exercise.

“It’s about exploiting our strengths and learning to work around everyone’s weaknesses,” said Ryan Erwin, another member of the Diabetes Winners! team. “It’s about group work. Teamwork. It seems so simple. You can only do that with many heads in the game.”

Judges were tough but fair: After all, the weekend was about the learning experience. “To say we’re going to Facebook and Tweet is not really a sell,” one of the judges said in response to a pitch, pressuring entrepreneurs to re-think and revolutionize marketing strategies. They left entrepreneurs with a few key pieces of advice:

Salzman said the judges considered “who could actually be a thriving company down the road.” The winning company, Diabetes Winners! said they hope to continue the project running, and to check back to see where they are moving forward.

Start-up weekend is a grassroots campaign that happens in cities around the world. “All these people are placed in a pressure cooker,” Haun said, adding that the array of talent allows people to not only develop meaningful products, but allows people to learn from each others’ skill sets.

Haun said the event will be taking on new forms and new directions moving into 2013, inspiring more people to hop onto the startup weekend ideal of “No talk and all action.”

By summer, Haun said the first of a series of specialized start-up weekends will begin. The first will be for “makers and hardware,” Haun said, but more events of the sort will expose entrepreneurs to new industries such as healthcare, education and finance. “It’s about new talent but it’s also going to be about solving actual problems,” he said.

“There is a social gain,” he said. “There are so many MVPs.” Separating start-up weekends will help more of these MVPs shine in their given field, whereas the diverse array of talent in Wednesday’s space was diluted by people having to choose between different industries.

“Not a lot of people know these events exist, ” Haun said. “It’s about managing their lives.” The weekend’s expansion wil not only will this draw more people to the start-up weekend experience, it will also keep some of the existing competitors coming back, and continuously adding more talent to the table. 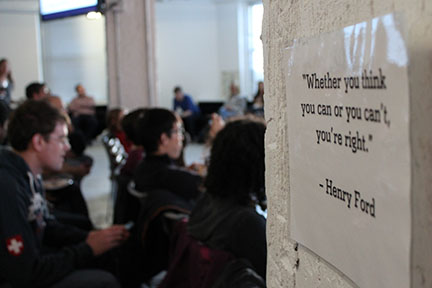 Great Article! What stuck out the most with me is how to tell a story when you are pitching. I recently won startupweeked bay are with BeforeWeDo ! I had to use my personal experience in STD testing to make my idea relatable and interesting! I definitely caught the crowd’s eye, so its important that you be as real as possible. When it came to our presentation…it was very visual and we were sure it told a story that the audience could follow. There is definitely more learnings I’ve had tha tyou may agree on: http://bit.ly/14JBPqF