Chicago-Based TicketLab Lets You Search For Games How You Want 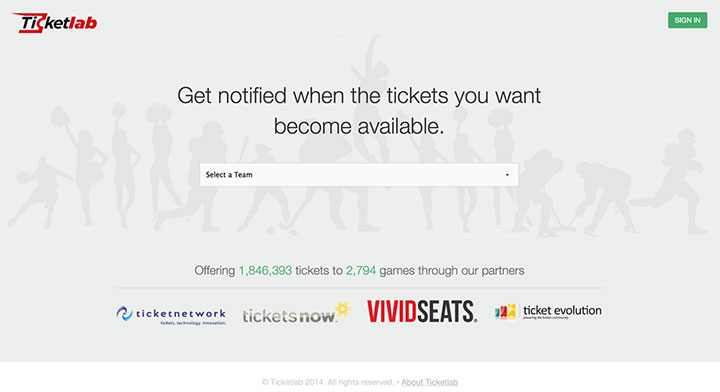 If you live in the city, there are a plethora of options available to you for entertainment.  Whether you’re interested in the symphony, rock and roll, or catching your favorite hometown team play one of its rivals, you can typically find something to do.  But, how do you find these things?

There are tons of websites dedicated to helping you with this, and of course, discount giants like Groupon or Living Social are always vying for your attention, too, with their flash sales and discounts.  However, even with all of the innovation we’ve seen in the last several years, the sports ticketing industry has been slow in allowing its users to search for the experiences they want.

Sure, you can go to a team’s website, but they force you to search for your tickets one way.  It’s typically by game and that’s about it.  TicketLab, a Chicago-based startup, hopes to change how you think about purchasing your sports tickets by aggregating data in a way that’s useful for you.

It all started when founder Iman Jalali wanted to find the cheapest courtside tickets for his Chicago Bulls.  He didn’t care about who they played, or even what day they played, he just wanted that experience at a price he could afford.  But, he couldn’t search this way online. At least, not yet…

“Ultimately, what I’m really trying to do is bring advanced searching and advanced notification to an industry who is basically only allowing you to search that data in one way,” said Jalali.  “We’re not trying to be a marketplace by any means, to be a StubHub where you go and post tickets.  Basically, the inventory of tickets already exists online, so we’re aggregating tickets from the different secondary sites out there.” 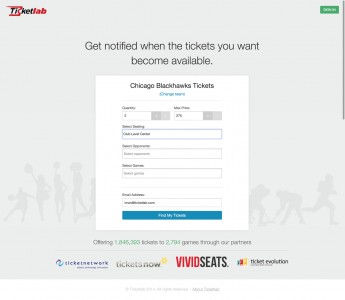 Of course, that’s just the beginning.  Jalali is also allowing users to set up alerts.  He explained it to me this way, using my favorite baseball team, the St. Louis Cardinals.  “You’re going to hate me, because I’m a Cubs fan,” Jalali laughed.  “But the tool is built for me.  I used to live near Wrigley.  We would go to any game.  It doesn’t matter.  If we knew we could get the first five rows by the dugout, and it was in our price criteria, we’d go.  Traditionally, you’re a Cardinals fan, they force you to pick a game.  With TicketLab, it’s kind of like a set it and forget it for the sports fan who wants to go to games, but doesn’t care which game they see.”

Of course, Jalali recognizes this isn’t for every sports fan.  “Like right now, the White Sox, it’s hard to get people in the stadium.  More than likely, a White Sox fan won’t be using our tool,” he explained.  “But the Blackhawks, you can’t get in for under $100.  It’s nice, like if you have a kid, and your kid wants to go and you can’t afford it, you can set an alert for any time a ticket is under $50.”

He also mentioned that other industries are already allowing you to search this way, and it frustrates him sports ticketing has had such a lack of innovation.  “It’s basically an industry that really has remained stagnant and hasn’t allowed users to have flexibility over that ticket data and search it the way they want to,” he said.

You’ll notice that the site isn’t perfect, and TicketLab over the course of its public beta has a few things that it will need to grow into if it’s deemed popular.  For example, it’s not exactly real-time.  Jalali is “trying to bootstrap this,” and his server costs would likely quadruple if he updated more frequently.  “Right now, it’s about four times a day, so roughly every six hours,” said Jalali.  “Point is to make it into a real-time engine, but obviously trying not to go bankrupt at the same time so have to keep it at every couple hour interval.”

Even so, it’s an interesting development in sports ticketing, and Jalali just might have a popular niche search engine on his hands in a few months, even if I don’t particularly like his inspiration.  (There are several things I could say about his beloved Cubs team, but I won’t.)  At the end of the day, no matter what team you cheer for, his startup could allow you to see more games at better prices.  In my book, that means you’re all right Jalali, even if you are a Cubs fan.

Check out TicketLab, start searching, and set up a few alerts to help you gain access to the sports experiences you want.

Being Turned Down For Funding – Two Perspectives