Home > Blog > Chicago (And The Midwest) To pando daily: Shove It

Chicago (And The Midwest) To pando daily: Shove It

Yesterday as I was perusing various news sites and getting caught up on everything, I was treated to a very special episode of pando daily about Chicago written by Trevor Gilbert entitled ‘The Midwest Mentality.’

In it, young Trevor talks about how the Midwest Mentality has made Chicago a city of “pragmatists” when he says:

Although I’m coming from a different perspective, it appears to me that after having looked at the ecosystem from an outsiders’ perspective, the entire concept can be boiled down to one term: pragmatic.

Pragmatism is defined as dealing with issues on a practical level, rather than a theoretical one. What does this mean in the context of startups? Well, it means that there is no “let’s build a cool tool and then figure out the business model”. No. In fact, if you do that here, you don’t belong. That’s a plain fact that I have found very few people disagree with.

Before my anger fueled fingers could get to the keyboard, Matt Moog, founder of Built in Chicago and Viewpoints (and he who walks on water, heals the ill with his touch and on and on) issued a well thought out, polite reply because he is a polite, successful and all around nice guy.  You can read his reply here: Pando Daily slaps Chicago in the face. Are we going to take it? I won’t go through Matt’s points (all valid) as he did an excellent job in his response and you should check it out.  Because Matt is a nice guy and mixes well in polite company and I tend to be a bit of  a roughneck, allow me to interpret Matt’s reply in a way he wouldn’t say it but in a way our whole city thinks when we get criticized unfairly. 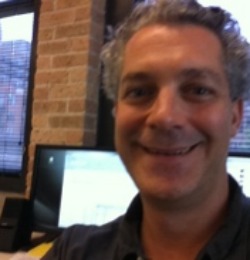 What Matt was saying on behalf of Chicago and the rest of the Midwest is this to Trevor and pando: Shove It

While Trevor was busy exploring Chicago and being totally clueless about our city- like when he tried to add color to his piece and mentioned standing outside at the “Jackson subway stop.” SUBWAY? Brother, if you can’t get the language right, don’t go for local color.  It’s called the “EL”, or “L” for “elevated.” (I know, catchy, right?)  Yes it goes underground too but its still called the EL.  Calling it the subway is like saying San Francisco’s homeless don’t use people’s covered porches as a toilet (i.e. wrong.)

Okay, so you didn’t get the EL right.  Rookie mistake.  Let’s deal with the main issue:

Sarah Lacy raised $2.5 million to start a new media company and become the ‘site of record for startups.’  So, what did Sarah Lacy do with her $2.5 Million? She hired a 19 year old to go to Chicago and describe the entrepreneurial startup ecosystem.

I’m sure Trevor is a delightful fellow and ambitious.  (He has to be or he wouldn’t be doing what he is doing at such a young age)  Admirable as that may be, he is still 19.  A key tenet here at Techli (that we constantly work on, occasionally fail at but keep striving towards) is having people write on topics they have authority on.  We wouldn’t have a 20 year old write an article about what makes a startup successful anymore than I’d write an article claiming to know the challenges of being a woman in tech.  The person writing the story and telling the tale needs to actually know of what they speak.  As smart as Trevor is (it shows in his writing) I seriously doubt he has the knowledge of what truly makes a startup work or not. The exception would be a 20 year old that started a company at 16 and sold it by 20.  They would be entitled to speak to running and building a business- but a 19 year old new journalist?  Don’t think so.

The real problem here is not Trevor; he is hustlin’ and working to make a name for himself and write about the industry.  The real problem is Sarah Lacy and the joke of pando daily as a serious news source.  I say don’t say this lightly but after  running around in startup news for awhile now, I have learned a lot and am a bit jaded, to say the least.  Silicon Valley is like a pile of gerbils in a cage and everyone is busy trying to climb up on top of each other and a lot gets lost in the noise.  This is where unbiased opinions and news could come in, but sadly it does not.

A couple weeks ago I was in my old stomping grounds in San Francisco and the Bay Area meeting with old friends and talking to some very well known VCs.  As my business is new media, we talked about the landscape and here is a paraphrasing of what was said directly to me by the VCs I chatted with:

The only reason pando daily got funding is because Michael Arrington put money into it and everyone is afraid of him.  For most funds, the amount of money invested in Sarah Lacy is a rounding error to them and they did it because they expect that they are buying good reviews of their portfolio companies

After reading that you might be saying, “Well, maybe.  But Edward Domain has a big G-D mouth and really, what does he know?” (Okay, you got me.  I grew up brawling and am never one to shy away from a chance to put my foot deep into my mouth)  In case you don’t take my word, how about Real Dan? He says almost word for word what I heard from some very respectable folks in the Valley.

The truth is that much of startup New Media is a big steaming pile of horse sh*t that keeps getting dumped into a trough for every sychophantic wanna-be to lap up with a spoon and ask for more.  I see bits of it trying to creep into Techli all the time- startups getting reviewed ask to see the article we’ve written before we publish it.  Umm, no. That’s not how journalism works.  We are not a free advertisement for your business.  We will review you fairly and if the article makes you look good because you are doing a good job, then hooray for you.  But if you are shady, shoddy, poorly thought out or, (as in this case) have no authority to speak on the matters you are writing, Chicago will tell you to GTFO with a quickness.

Real media needs to be unbiased and objective.  The problem is many VCs say, “New Media isn’t scalable as a business for investment” and the new media companies are left hustlin’ to find sources of revenue and tell the stories they want to tell without selling their souls while publishing and maintaining integrity.  This causes more than a few to start kissing ass to get off the ground- pando daily, however, could not ask for a better scenario.  It has $2.5 MILLION to build a new company and is invested in by none other than Michael Arrington- the same guy who thought bloggers shouldn’t raise funding now has invested in pando and Sarah Lacy built her own sizeable following at TechCrunch.  Why she sent a 19 year old to pass judgement on a city baffles me.

Chicago always has been a smash mouth, blue collar city that prides itself on many things; mostly being the ‘City that Works’ and, of course, being Chicago.  The startup landscape is decidedly not blue collar, true, but when I grew up riding on my Grandpa’s lap while he drove the EL around the city, he taught me about what it means to be from here and brother, there is a WORLD of difference between sweet home Chicago and the Bay Area.  Some good, some bad, but nowhere on Earth is there a city like Chicago and  our tech innovation is growing almost at an exponential rate.

Trevor did point out one thing correctly: The investment community in Chicago doesn’t have the appetite for risk that the Bay Area does.  I’m not sure if that is because most of the VCs were investment bankers first and therefore are convinced certain ideas (*cough*cough*New Media*cough) aren’t scalable businesses (at the VC-100s-of-million of dollars level) but early stage money is definitely harder to come by in Chicago than it is in the Bay Area.  I’ve watched as some super bright entrepreneurs have given up on Chicago and moved to Silicon Valley for this very reason.  Chicago isn’t perfect and we have a ways to go with our investment community and the risks they are willing to take.  Matt Moog pointed out excellent examples of Chicago successes- Trevor gets points for recognizing one of our problems but the sweeping generalizations he makes outside of that are way off base.

Being from Chicago and launching a startup doesn’t mean we don’t have the drive, tenacity and sheer force of will to make it.  The entrepreneurs in Chicago walk the same path the entrepreneurs in the Valley, St. Louis, Dallas and other cities walk.  Living inside the Bubble of the Bay Area obviously has blinded most of the people that live there.  Having a child does not preclude one from launching a startup- far from it.  I know singles, married folks and others that all bust their ass day in and day out to make their businesses live, grow and succeed.

The next time pando daily wants to ‘cover’ Chicago, I’d like to recommend Sarah Lacy spends some of that war chest on a journalist with a bit more experience that knows the city and have them spend more than a week or two here.

The Future Of Comments