CEOs With A Shake Weight

As the community manager for DealsGoRound, a secondary marketplace for daily deals, most of my time is spent tweeting and talking with savvy college students, deal-hunting moms and thrifty online shoppers, most days that is. However last month, in what felt like an average Wednesday afternoon the Twitter gods smiled down upon DealsGoRound and myself  by connecting us with As Seen On TV Royalty.

Chatting with one of our followers about the day’s Shake Weight Groupon,  I  caught the Shake Weight Official Twitter handle’s eye & we struck a deal. The beginnings of CEO With A Shake Weight had begun:

We do, too, @DealsGoRound ! Thanks for the support 😉 #thanks

Well, @DealsGoRound , can we make a deal? If we send a #shakeweight to your CEO can we get a pic / video of him/her using it (correctly)?

It’s a deal, @DealsGoRound – Please let us know where we should send @KrisPetersen his #shakeweight !

What is the startup world missing? Some may say enough investor captial? Others bootstrapper-friendly co-working spaces?
Wrong.

The startup world was missing shakeweights. DealsGoRound and I set out to fill the vibrating dumbell void, once CEO at a time.  And thus CEOsWithaShakeWeight.com was born. 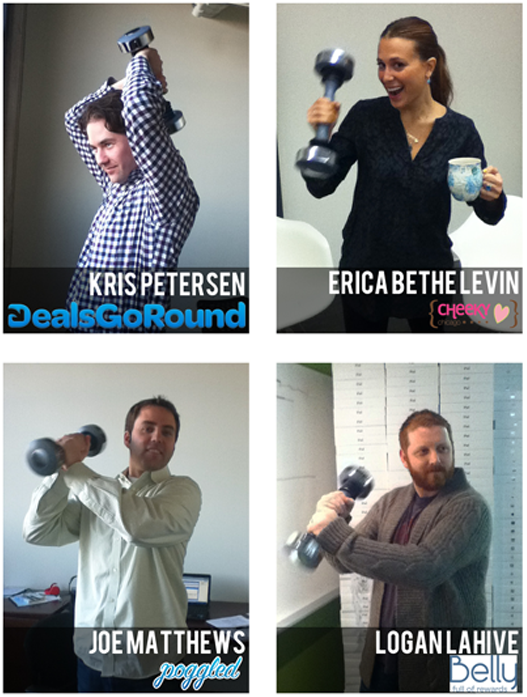 5 Qualities Of A Great Entrepreneur