Carmageddon Is No Match For Cyclists

At some point in our lives we have all asked or have been asked some form of the following question:

Who would win in a fight, Batman or Superman?

If you’re unlucky, this will turn into a three-hour argument about the superiorities and inferiorities of each superhero and the color of Robin’s tights that ultimately ends when one of you throws a pile of comic books at the other. I may or may not know from experience. If you’re lucky, you’ll actually get to witness a variation of the challenge you issued. On July 16th, Tom Vanderbilt got lucky.

It all started with a tweet – ah, the power of social media. On July 14th, Vanderbilt sent the following tweet out into the Twitterverse:

Unless you’ve been living under a rock, which, let’s face it, is rare but possible, then you know that this past weekend Carmageddon wreaked havoc on Los Angeles. The 405 was shut down for two days for a bridge demolition. The impending doom that was to follow the closing of LA’s busiest freeway was enough to scare people off of the roads for the whole weekend. (Thanks, by the way. My Friday morning commute has never been easier!) To encourage people to stay off the roads, JetBlue launched a Carmageddon promotion and offered $4 flights between Long Beach and Burbank.

The flight distance is 29 miles. The driving distance, on freeways, is about 40 miles. To ensure this was a fair fight, rules were set in place. For example, bicyclists weren’t able to blow red lights or ride along sidewalks. JetBlue travelers still had to factor in time to and from the airport. 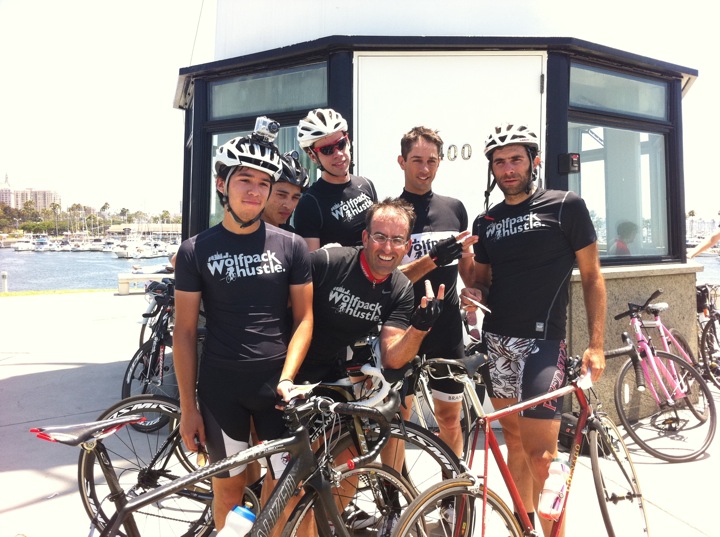 A team of cyclists from Wolfpack Hustle were up for the challenge and on Saturday they raced an A320 JetBlue aircraft. The city watched the race unfold on Twitter via the hashtags #flightvbike and #OverThe405. Local news station KTLA was there to cover the start and finish of the race.

The cyclists, JetBlue flyers and the KTLA van all kicked off the race at 10:50am. With little to no traffic, the KTLA van was the first to arrive at the finish line. Their total commute time: exactly one hour. The Wolfpack Hustle team was right behind them with a finish time of 1 hour and 34 minutes. The two JetBlue travelers clocked in at 2 hours and 52 minutes – after adding in the time it took to get to the airport, go through security, board, de-plane and the cab ride to the finish line.

Los Angeles might not be thought of as a bike-friendly city, but to those brave enough there’s a lot of reward in the journey. Many people involved in Saturday’s race said that they got to explore parts of LA they’ve never seen. In addition, riders raised $7,000 for the Los Angeles County Bicycle Coalition (LACBC).

Twitter has certainly come a long way since 2007. It’s crazy what one tweet can lead to, huh?