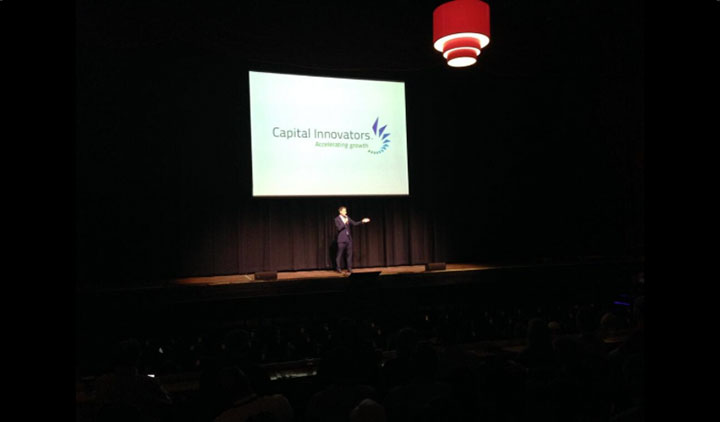 Michael Reuther never intended to be an entrepreneur.

“Originally, I had a music blog when I was in college, when Napster was around and Facebook was just getting big,” Reuther explained. “I never intended to actually start a business.”

What changed? On his blog, he filmed an uncut acoustic music video and found there was a lot of viewing demand. From there, Reuther co-founded OurVinyl.TV, a site which provides unfiltered acoustic videos of a host of different artists. Today, his company has partnered with 30 different companies to provide thousands of unfiltered music videos. He wants to disrupt the music video industry like Netflix and Hulu have disrupted the network television industry.

Reuther’s company was one of 10 companies to present at Capital Innovators’ Demo Day at the Pageant Concert Hall on Tuesday. Twice a year, five different startup companies focused in the technology sector are chosen to participate in this accelerator program. Capital Innovators, based out of the T-Rex co-working space downtown, gives each of the companies $50,000 in exchange for a slice of equity in the company.

“It’s like having a big-time management consultant without the expense,” Bernstein said. “These mentors help these companies because they are passionate about entrepreneurship.”

Approximately 150 companies applied to take part in the most recent Capital Innovators program, Bernstein said. In order to determine the five companies, the team at Capital Innovators conducts due diligence on the companies by looking at a host of both qualitative and quantitative measures. Once the list has been whittled down to 15 or 20 startups, the finalists are then brought in for an interview to go over the business in detail.

Pixel Press, which allows people to draw their own video game, was the first company to present. According to marketing manager Katie Burke, the iOS app just went live three weeks ago. Since then, 1,500 games have been created.

The acceptance into Capital Innovators wasn’t the first success the company has had with fundraising. Burke initially worked with co-founder Robin Rath on a Kickstarter campaign last year, which raised over $100,000 in just a few weeks. She joined the company full-time beginning in December.

“I believed they had something unique,” Burke said. “There is really nothing out there like Pixel Press.”