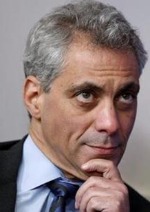 In a unanimous decision today, the Illinois Supreme Court has ruled that Rahm Emmanuel can remain on the ballot for the Chicago Mayoral race.

As part of its ruling the High Court said, ““This is a situation in which, not only did the candidate testify that his intent was not to abandon his Chicago residence, his acts fully support and confirm that intent,”

Emanuel said he was on his way to a campaign stop at an L stop when he heard the news. ““I immediately called my wife,” Emanuel said. “I also called my parents, and I took a call from the president of the United States.”