Matter: One Story A Week 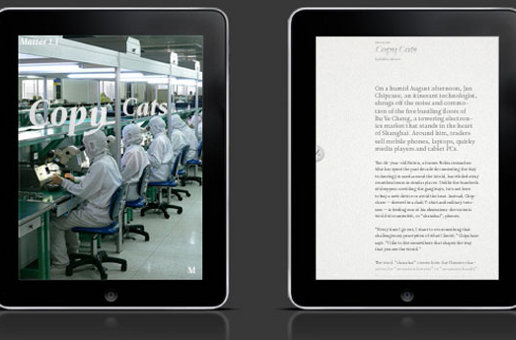 Web-based journalism–Techli included–tends to reward concise content and snappy headlines over in-depth coverage. Matter seeks to turn that model on its head, publishing just one long-form story a week–sort of like the Woot.com of online writing.

“We think the reality is that Big Media is getting smaller, and we want to find ways to produce the best work but without the legacy of print,” wrote co-founder Bobbie Johnson in an email message. “As journalists ourselves, we’ve seen a constriction in the amount of outlets that will run this type of reporting.”

The idea is simple. No “cheap reviews, no snarky opinion pieces, no top ten lists. Just one unmissable story,” the authors promise. The project is enormously influenced, according to Johnson, by longstanding long-form outlets like The New Yorker. It’s an attempt to make that style work in the context of online advertising, where the fight for impressions can easily overpower content.

Matter, which will focus on science and technology, will run some form of advertisements in addition to charging $.99 per story, according to Johnson. It will be available on a wide variety of platforms, and the archives will be free to view.

“Our inspiration really came from hearing a lot of people issuing laments,” Johnson wrote. “Readers seem to be looking for deeper, more satisfying writing; writers are sitting on thousands of amazing stories because there aren’t many places that will let them do the best job of telling them. That felt like two sides of the same problem. We looked at outlets like Byliner.com and The Atavist–both groundbreakers we have the utmost respect for–and realised that there was an opportunity to try and solve this problem ourselves.”

Johnson says he is excited about the opportunity to focus all the team’s resources on one story at a time, a radically different editorial process from the frantic world of blogs, daily newsprint and many web magazines.

The founding duo has certain industry credibility. Johnson currently serves as European Editor for GigaOm, and has written and edited for the Guardian. Jim Giles has edited Nature and has written for The Atlantic, Wired, and The Economist, among others.

The idea seems to have struck a nerve. At press time, Matter’s Kickstarter page had raised $62,949, of an original goal of $50,000. A donation of more than $25 secures a spot on the editorial board.

“One story a week,” Johnson wrote. “Nothing more. There is no front-of-book. There are no inserts, no splashy ads. You don’t have to flick through dozens of pages of guff to get to the story you’re looking for.”

Matter will launch this spring.