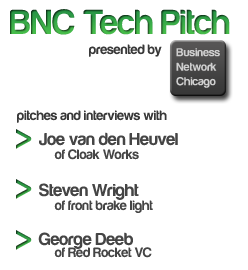 What does simulated cloth, a brake light, and a serial entrepreneur have in common?  They were all found at the latest BNC Tech pitch.

BNC Tech Pitch is an event put together by Business Network Chicago that gives two early stage startups the chance to pitch their ideas to a mix of angel investors, venture capitalists, and tech enthusiasts. The format is quick and straightforward with each presenter given 5 minutes to pitch their idea followed by 10 minutes of open Q and A. Following the two startups there is an interview with someone both noteworthy and relevant to share his or her experiences. For the February installment the presenters were Joe van den Heuvel of Cloak Works and Steven Wright for the Front Brake Light, and the interview was with serial entrepreneur George Deeb.

Shortly after David Carmen, the President and CEO of Business Network Chicago, opened, he introduced David Culver who spoke briefly about Funding Feeding Frenzy which will be May 4th. FFF is a similar style event to the BNC Tech Pitch but on a larger scale, where each company presents to a panel which will include venture capitalists, angel investors, and private equity investors, whose interest match with the company profile. At Funding Feeding Frenzy companies are split up into three different categories based on the amount they are looking to raise and type of investor they are looking to court. Those looking for less than $250,000 and an investor who can possibly provide access to resources a startup may need are placed in the Guppy Bowl, those looking for an additional $250,000 to $1,500,000 to grow and possibly add to their sales and distribution channels are places in the Piranha Pond, and finally those seeking millions of dollars are placed in the Kraken Cave. For those who may not have noticed, FFF is a nautically themed event.

After David Culver finished, Joe van den Heuvel began his presentation on his company Cloak Works which develops real time cloth and hair simulation for video games. Joe has over a decade of experience working on games for large developers and publishers such as Electronic Arts, Lucas Arts, Disney, and Warner Brothers, and as such has insight to both the industry and game development. He went on to play a video which demonstrates his technology, and I must say, I was impressed.

The video showed near-movie quality cloth and hair effects in real time running on average hardware. Where one would expect a rather rigid cardboard cape, you see a realistic simulation. Although he did not have a video ready, he has already implemented his technology into Assassin’s Creed and I trust it looks infinitely better. We have all seen astonishing cloth simulation in movies and the like, but what blew me away was seeing it done in real time on something other than a supercomputer. His technology is already in an advanced stage and several AAA publishers and development studios have expressed serious interest in incorporating his technology into their games. On top of this, Intel has invited Joe to present his technology at their booth at this year’s Game Developers Conference in San Francisco.

Joe said cloth and hair physics in a game like this is a luxury and something often sacrificed due to the resources it requires. Joe’s technology however puts movie-like cloth and hair well within reach for most every game (and soon including mobile games), and once consumers see the level of simulation in a game that Joe’s technology will make possible, it will become expected in nearly every game, and Joe stands to win again.

Visit Joe van den Heuvel and his technology at cloak-works.com.

Following Joe’s presentation and Q and A, Steven Wright began his presentation on his front brake light. The front brake light is exactly what it sounds to be; it is a light that goes near your center review mirror that illuminates when you apply the brake to alert people in front of you that you are braking. At first I thought of it as a superfluous add-on and I questioned what positive influence or effect it would have, but after a few possible scenarios and videos I quickly see what a huge difference it could make.

In a brief nutshell, a rear brake light tells people behind you that you are stopping, and a front brake light tells people in front of you that you are going. There are countless situations where this immediate information would be useful. For one, imagine you are approaching an intersection and someone in on-coming traffic is attempting to make a left-hand turn, you can visually confirm that they are braking and not going to pull out in front of you, or, more importantly, that they took their foot of the brake and they are going to attempt a turn. It would also tell you when someone is braking for a stop sign (or not), braking for a red light (or not), or going to pull out (or not).

Steven says for his light to be effective, the public needs to know what the front brake light is which is why he is raising money to create a public awareness campaign. During the open questions and answers, many people pointed out that there is a huge potential market in organizations that would look to lower their liability such as taxi and rental car companies. People also recommended that he perform a study to prove that it increases safety. When asked about the history of the center rear brake light Steven says it is very similar to the planned trajectory of his brake light. The center rear brake light started out as an after-market accessory (like his) that grew popular for both its uniqueness and improved safety (which he hopes to replicate), and less than a decade later it became mandated on all vehicles. If Steven is able to start the snow-ball effect for his front brake light, its success is practically guaranteed.

To visit Steven and his front brake light go to frontbrakelight.com.

After Steven’s presentation David Carmen interviewed entrepreneur George Deeb. George’s career started in investment banking in New York. After a several years of earning a decent income but not having the time to spend it, he decided to finally scratch that entrepreneurial itch and move to Chicago to start his first venture, iExplore. iExplore started as a website to help people plan hiking and other active trips. For his venture he raised money during the tail end of the dot com boom, and by tail end I mean a month before the crash. He also admits that the money he raised was the wrong kind of money. His investors and board were comprised of people experienced with large, established businesses, not tech startups. Unfortunately this ran true for his expensive senior management with impressive pedigrees as well.

When iExplore was flush with cash George put together a brand name senior management and an expensive infrastructure. Then came the crash which hurt start ups like his, and then came 9-11 which hurt companies in the travel industry, like his. With money and business drying up fast he had to restructure iExplore from the ground up, which included letting everyone go and asking for volunteers to stay without pay in the hopes it would all turn around.

Thankfully it did. In its more lean form, revisited direction, and lessons learned iExplore become a success and was later acquired in 2007. After cutting his teeth with iExplore and becoming wiser by leaps and bounds he became the CEO of MediaRecall, a provider of enterprise-scale digital video services and other video technologies. He successfully led MediaRecall through a sale to Deluxe Entertainment Services Group which gave investors a 10 fold return on their investment.

During open questions George shared the importance of staying nimble and grounded in making a tech startup successful. He also said that not all investors are the same, and the investor that can open up a rolodex of valuable relationships is infinitely more beneficial than the guy who can just write a check. George also shared his opinion of the current fund raising climate in Chicago that although it is now the best it has ever been, the series A fund raising is still a little weak. Looking back at his experience of being a first time CEO he expressed hesitation about investors investing in other first time CEO’s. First timers will make mistakes, like he did, and they will be learning on the investor’s dime. He advised to invest in CEO’s that have experience and a successful track record. When asked what a first time CEO could do to raise money George said to leverage friends, family, and angels, and work twice as hard to prove your model.

George is currently on the hunt for his next project and can be found at redrocketvc.com.

Overall, the February BNC Tech Pitch and following open networking was full of interesting ideas and compelling conversation. I was able to meet a wide range of people with varied expertise and unique vectors. Despite the fact it will no longer be held by the Sync as all the previous pitches have, I am excited to see what the next Tech Pitch brings. 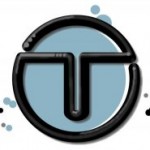 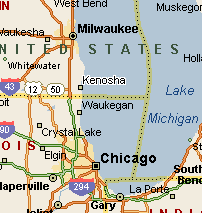 CEO Sundays: A Newcomer’s Thoughts On The Chicago Startup Scene