Anonymous Takes Down City Of Chicago, CPD Websites In Protest Of NATO Summit 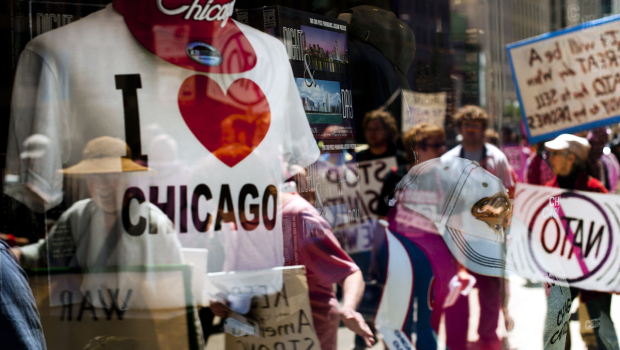 A branch of hacktivist collective Anonymous can claim at least two minor victories for themselves and protestors of this weekend’s NATO summit in Chicago. As of this morning, announcements of #TANGODOWN have flooded across Twitter. Anons have successfully brought down The City Of Chicago‘s website, as well as that of the Chicago Police Department in a DDoS attack unofficially referred to as #OpNATO.

A video released by AntiS3curityOPS — a group which doesn’t claim to “represent Anonymous or AntiSec as a whole, for we [they] one small piece to the puzzle” — is currently unavailable, as it’s been set to “private” for unknown reasons. The website Cyber War News either made or obtained a transcript of the video before it was taken offline.

Greetings fellow citizens of the world, we are AntiS3curityOPS.

While this has come to no surprise, the NATO protests are already reaching a boiling point. As tonight we have already witnessed the Chicago Police Dept sending out a request for two water cannons deployed on Michigan Avenue, which the protesters briefly were able to close of the street completely. Just a few moments ago we witnessed cops on horses seemingly all too content with the destiny that has turned their hearts cold, trampling over protesters trying to intimidate. And you know what we saw during this? Protesters locking arms and holding their ground. A few had Anonymous masks’ on, a few were girls who looked like they belonged safely off on the sidelines bravely charging cops with shields and on horse. All the while the protesters are chanting “Take those animals off those horses”, drowning out any attempts by the Chicago police to get a word in. Everyone of you are hero’s to us.

What we saw tonight watching a bit of the protest was everyday, average people fighting back and finally refusing to stand down. The NATO Summit is being utilized in such a way, and we couldn’t have predicted it more accurately. On the video we saw Mother’s, teenagers, elderly, the anarchists, white, black, hispanic, this movement see’s no skin color. every sort of person is well represented in these actions.

This is not a time to have our differences divide us, this is a time we all need to come together and rally around our brother’s and sister’s bravely in the street’s of Chicago risking their lives to make the one voice they have, heard. If every single one of us has a voice, one opinion, let us unite and show the violent Chicago police, and the government big brother tactic’s that we are not gonna take this.

We are actively engaged in actions against the Chicago Police Deptartment, and encourage anyone to take up the cause and use the AntiS3curityOPS Anonymous banner. For those able, chicagopolice.org should be fired upon as much as possible. We are in your harbor Chicago, and you will not forget us.

So for those unable to engage in attacks online by ddos, share with everyone you know what’s presently going on in Chicago, Tweet celebrities on twitter with the #SolidarityWithChicago #FuckNATO #FTP hashtags and get it trending. Also keep watching the live feed’s, and spreading the live feed links all relevant places. Together, we the people, are gonna take the power back.
We are AntiS3curityOPS.
We are Anonymous.
We are legion.
We do not forget.
We do not forgive.
Chicago Police Deptartment, expect us.

Despite the narrative, there have been no reports of water cannons being used against protesters. There has been confirmation that people have once linked arms and charged the police, but except for standing in a line, the police did nothing to precipitate the action. Reports from the journalist’s friends, some of whom are participating in the protest, indicate that there have been efforts to impede The Chicago Police Department from following alongside the march; such efforts include blocking horses and, according to a citizen journalist, slashing the tires of a police van, surrounding the van and hitting it. Police have been surprisingly restrained in dealing with the protesters.