When Alex Banayan was made an associate for Alsop Louie Partners this winter at age 19, he likely became the world’s youngest venture capitalist. 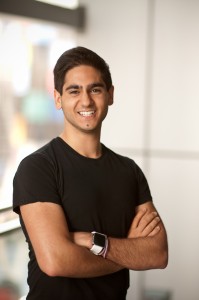 “It’s just been the most unbelievably crazy time of my life,” said Banayan, who is a rising junior at the University of Southern California. “I didn’t even think it was in a range of possibilities for me to be a VC at this age. I’m meeting with some of the coolest young tech entrepreneurs in the trenches.”

Banayan’s opportunity in venture capital arose from an ongoing foray into nonfiction writing. While researching a volume on 25 people who became successful at young ages, he reached out to Ernestine Fu, a Stanford undergraduate who became an Alsop Louie associate when she was almost as young as Banayan.

The two bonded over sushi, and it wasn’t long before Alsop Louie offered Banayan a job scoping out the college-age crowd for promising projects. Though he wasn’t initially sure he wanted to dilute his focus, he ultimately took the job.

“I have a natural entrepreneur itch in me,” he said.

He now travels regularly for Alsop Louie, and is meeting consistently with some projects, though he can’t comment at this point on whether any are close to securing funding. So far, he has balanced that work with a full course load.

Banayan – who credits self-help guru Keith Ferrazzi, who has agreed to pen the foreword to his book, as a personal mentor – says it was his parents, both Iranian Jews who lost everything when they fled the revolution in 1979, who instilled him with the work ethic and interest in science and technology that have gotten him this far.

Though Banayan exudes energy – he gushes, and even comes across as a bit uppity – he concedes that being on the other side of the entrepreneurial coin from well-known, precocious success stories like Bill Gates and Mark Zuckerberg introduces a certain pressure to succeed. But he does his best, he says, to trade on that anxiety and turn it into enthusiasm.

“The fact that I’m tredding into unknown territory, I’ll be honest, sometimes I get nervous,” he said. “There are uneasy moments, but the unease creates a great sense of possibility for me. It gets me excited when I get out of bed in the morning.”

Hack the Midwest: 24 Hours to Build Something Epic

GoMobile.Pro: Monetizing Virtual Space, And Breaking Out Of The Walled Garden