Submit Your Startup To Win $25,000 Worth Of Free UX/UI Design From AKTA

AKTA, a Chicago-based design and innovation web studio, has recently launched a contest where startups can submit their service to win up to $25,000 in free user experience/interface design work. The company has worked on mobile and web designs for services like Pawngo, Cashable, and Magento. With the contest, AKTA aims to make both an impression and a difference in the digital product startup community. 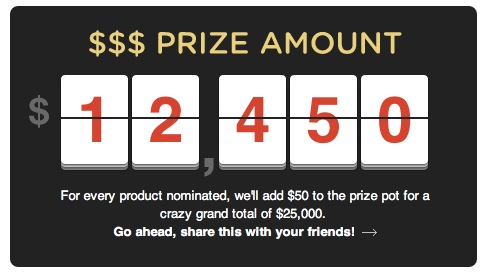 Startups that already have an established service are eligible to enter the contest, which first began accepting entries at SXSW this year. Companies can nominate their product simply by logging in to Twitter, or if you know of a great product who would benefit from the contest you can have the website send them a nomination form. After being authenticated, startups will be required to fill in some basic information, which will then be approved by AKTA in order to receive votes.

The opening prize amount began at $10,000, but for every product nominated AKTA is adding an additional $50 to the pot. If the service reaches 300 nominations it will hit its cap of $25,000, though the company will continue to accept new startups beyond the prize cap. Currently the prize amount is at $12,450.

Voting will take place between May 1st and June 15th, where anyone voting can choose up to five startups they would like to see win the most. After a month and a half of voting, the winner will be announced at TechWeek in Chicago on June 22nd.

John Roa, founder and president of AKTA, sees the contest as an opportunity to help along exciting new startups.

“We don’t always have the opportunity to work with all the companies that we’d like to, so this is our way of ‘investing’ in and helping a team the only way we know how, with exceptional digital product strategy and design.”

The nomination period closes at the end of this month, so if you want to see your service among the nominees you’ll have to act fast.