A couple of weeks ago, the London Riots were a mystery to a lot of people, including myself. How did they start and why were people destroying and looting neighborhood businesses? The news broadcasted pictures of distraught business owners, leaning up against what used to be their storefront, in awe of what transpired in little more than 48 hours. What started out as a peaceful protest over a man shot by police during an attempted arrest turned into a violent, post-apocalyptic scenario.

Things took a turn from seemingly peaceful to aggressive in one day. The word of the impending riot spread extremely fast, starting in Tottenham and reaching many other districts, including the Oxford Circus in the center of London. Many questions were asked about how these riots came to be, and there was one overarching answer: social media. Rioters were said to use Twitter and Blackberry Messenger to quickly organize and call to action.

There’s no doubt that social media has played an integral role in modern day protests and riots. It fueled the fire during the recent Egyptian Revolution and assisted in the upheaval of Tunisia, but was it the cause of it? In an article by the LA Times (written in January), Jared Cohen of Google Ideas, Google’s think tank, said that there is no such thing as a Twitter revolution; social media can only act as an accelerant to uprisings already underway. While social media allows for people who are passionate about the same idea to find each other and organize a movement, people still have to be willing to speak up and potentially risk their lives for a cause.

That being said, the London Riots were very different from those in Egypt and Tunisia. The riots in London originally stemmed from police brutality, but as tension built, it provided an excuse for gang activity and looting. Those with an already loose moral compass were able to steal, burn, and beat with a facade to hide behind, and easy access to mass communication platforms. Blackberry took some major heat from the UK government. 37% of UK teens use a Blackberry device according to a recent Ofcom study, and protesters were able to communicate through Blackberry Messenger and out of the scope of authority. Twitter also recently agreed to meet with the UK Home Secretary about its involvement. This comes shortly after Prime Minister David Cameron suggested that social media might need to be cut off to those suspected of plotting criminal activity. This is problematic for many reasons, namely: democracy. But also, what constitutes planning a riot? This extremely gray area might make for more trouble than progress. 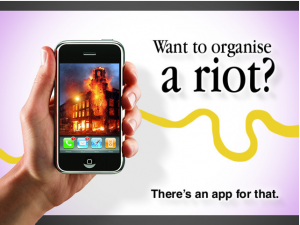 Social media is a very effective tool for mobilizing movements, but with these newfound tools also comes an easy way for government to trace where the upheaval is coming from. In some countries, this can mean a lifetime in prison or at least arrest, and the United States is no exception. On September 24, 2009, Elliot Madison was arrested for tweeting about police activity during a protest of the G20 conference in Pittsburg. According to Reuters, Madison was “charged with hindering apprehension or prosecution, criminal use of communication facility and, possessing instruments of crime — defined as telecommunications equipment.” Ironically, most of us never leave the house without our “instrument of crime.”

Though it may seem as if social media was playing the villain in the riots, it was also leveraged for good. Twitter was used to help clean up the destruction after the rioting. In less than 10 hours after creation, @RiotCleanup gained 50,000 followers. The account was used to broadcast locations and times of clean up and other ways to help. More than two weeks later, @RiotCleanup is now being used to inform followers of charities and auctions benefiting victims and businesses. Additionally, the Tumblr account “Catch a Looter” was created for people to submit images or names of known looters (it is no longer active).

Whether used for good or bad, times of disruption prove that social media is extremely powerful. However, social media cannot be solely blamed for the London Riots or any other movements accelerated by Twitter, Facebook or BBM. First there has to be an idea, if it’s spread or not is up to you.

[…] stories on Tumblr, and YouTube videos providing justice, the bond between social media and social movements is continually […]