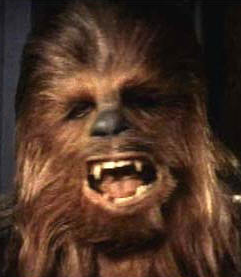 Brave Wookie and Rebel Freedom Fighter Chewbacca is bringing to light the secrets the Galactic Empire doesn’t want you to know about.

Shocking revelations such as:

Thank Goodness Twitter found its true purpose- revealing that the “insurgents” the Empire was attacking were really Ewoks. I hope the Empire wins agains those little savages.