This week, in a rather lengthy blog post Valve employee Michael Abrash wrote about the game company’s development of what he’s calling “wearable computing.” Abrash describes the technology as a viewfinder “where both computer-generated graphics and the real world are seamlessly overlaid.” 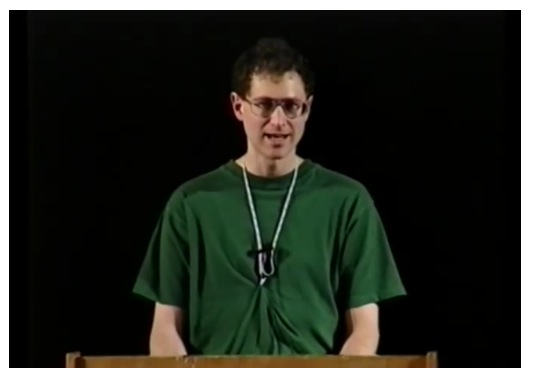 Michael Abrash at the Game Developer's Conference in 1996

Abrash began work on the project after some initial research and consultation with fellow Valve employees. At this point in the development process he specifically highlighted the research aspect of the new wearable computing technology over any solid product. In the blog post he wrote, “Please, no rumors about Steam glasses being announced at E3.”

The Valve employee pointed to wearable computing as an inevitability, believing that the current state of computing everywhere with smartphones and tablets will naturally lead to full integration technology, where everyone is computing all the time. Abrash believes that the new technology could be easily available within the next decade, though he admits it’s likely to surface even sooner than that. Abrash wrote about the technology being be applied to glasses and contacts, or even “direct neural connection” into the future. “Think Terminator vision,” he wrote.

Abrash credited the creative freedom of Valve’s workplace for allowing him to begin pursuing the ambitious project. Abrash wrote extensively in the first half of the blog post detailing how he came to work at the company, having gone through Microsoft and Id Software, developer of the legendary Doom series, before finally settling at Valve. Above all else Abrash pointed to Valve’s lack of a formal management hierarchy as being vital to its success — an unconventional system that he believes creatively benefits the company in ways that he had never before seen in his thirty years at other companies.

I think of it as being a lot like evolution — messy, with lots of inefficiencies that normal companies don’t have — but producing remarkable results, things that would never have seen the light of day under normal hierarchical management.

After Google launched a prototype video for its very similar Glass project, there could be a potential war on the horizon for ocular, persistent computing if both companies continue forward with the new technology. We’ll just have to see if Google’s standard hierarchical management system can win out over the freedom of Valve’s unconventional and largely successful think-tank.

This Company Created The 2Pac Hologram At Coachella [Video]