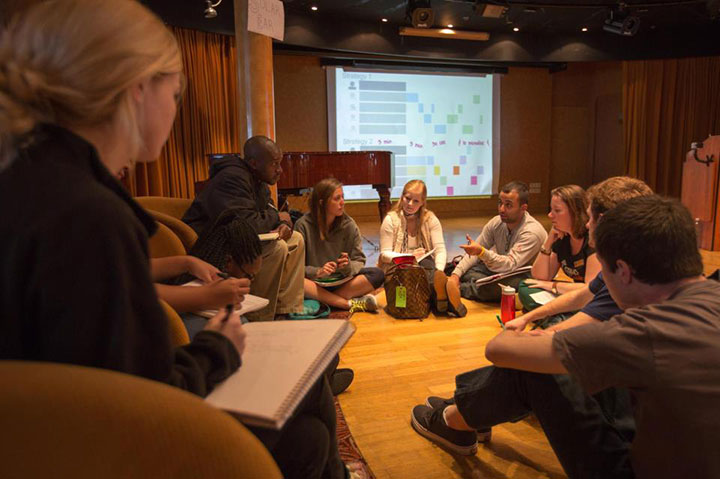 Sentences of this magnitude were not surprising to anyone who participated in Unreasonable At Sea. In fact, one of the most-reiterated credos on the ship was ‘CTFW’ (Stay with me. I’ll explain the meaning at the end of the article).

In my last article, I showed you how Agua is improving the sanitary conditions of hundreds of thousands of people by purifying water only with plants. This time, I’ll take you on another unreasonable journey and introduce you to Deaftronics, a startup that harnesses sunlight to power SolarEar, the world’s first rechargeable hearing aid battery. Lasting for 2-3 years, it can be used in 80 percent of the hearing aids on the market. It is versatile (it can be charged via the sun, household light or a cell phone plug) and is also digitally programmable – at ten percent of the market cost.

The Botswana-based startup was founded by Tendekayi Katsiga. By improving people’s hearing ability, Katsiga and his company allow people who were previously isolated to reengage with society. But it doesn’t stop there. Deaftronics is a prime example for how social entrepreneurship enables the poor to actively participate in their own economic development as the company employs deaf people to manufacture their hearing aids. That’s what I call killing two birds with one stone.

Yet, in spite of their resourcefulness and novel strategies, success doesn’t come easy for social entrepreneurs. The companies need to obtain enough seed money and understand the social values and norms that underpin the different cultures they operate in. Deaftronics, for example, tried to find a way during the voyage to make their hearing aids unimposing and cool, because many people in poor countries fear they will be mocked or even discriminated against for wearing them. The limited effects of humanitarian aid have shown that if companies want to be successful, they need to go into the countries to immerse themselves in new markets and cultures as well as gain empathy. It allows them to fine-tune their products and adjust to varying circumstances.

Although social entrepreneurs share certain traits with “regular” entrepreneurs, these creative misfits are different insofar as they seek large scale, systemic and sustainable social change by solving intractable problems as well as creating social value and measurable results. By adjusting the system rather than themselves, social entrepreneurs like Tendekayi Katsiga develop workable, innovative solutions to massive social, environmental and political challenges.

One goal of the Unreasonable Institute is to help companies meet the needs of at least one million people directly. Hence, their profits must be generated through volume sales. Since only a few nations have large markets at the BoP, solutions have to be scalable across borders and address many small poor markets. All eleven Unreasonable At Sea ventures fit into this scheme, and the majority of the destinations on the itinerary were developing countries with big markets including China and India.

However, most companies still don’t think of BoP people as a market due to the incorrect assumption that they don’t have any buying power. Social entrepreneurs, on the other hand, understand that while that may be true individually, the BoP is a vast-potential market collectively. Consequentially, ventures like Deaftronics consider BoP people participants in their own economic development and treat them as consumers and entrepreneurs, thus giving them respect, dignity and freedom of choice.

Still wondering what ‘CTFW’ stands for? If you haven’t guessed already, it’s what social entrepreneurs essentially do: they Change The F—— World.

Next time, I’ll tell you about a social entrepreneur who improves the health of thousands of people by changing the way they cook. Stay tuned!