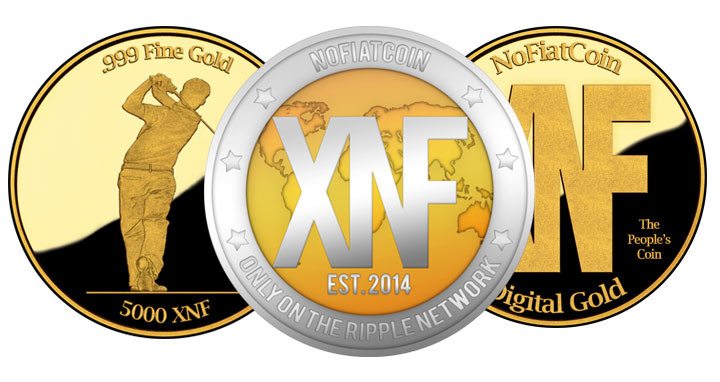 Well Bitcoin, you paved the way.  But, NoFiatCoin wants to build on that and offer something that they think is even better.  The currency was launched on January 6, 2014, and it’s received quite a bit of attention.  And the name says exactly what it is.  Essentially, they’re combining the best of cryptocurrencies with hard assets.  That’s right.  A cryptocurrency backed by bullion.  They are using the metals as a trust and stability mechanism for alternative currency.

I talked with the German-based founder Robert Reyes via Skype about cryptocurrency, Bitcoin, and of course, why he’s trying to start a movement offering more than just a digital currency.  For the digital currency purists out there, read through what Reyes had to say.  He knows he’s going to take some heat, but hear him out and let me know your thoughts in the comments.

Caryn: How did you come up with the idea and why?

Robert: “Bitcoin was such a great innovation.  I did jump on that train as well, a little later than most people did, but was still able to make a lot of gains out of it.  It hit me one day.  Why not marry the best of all three worlds?  Fiat also plays a part in it. You still need it, but I want to provide people a better way to move their values and their wealth.  That’s what the Ripple Network basically allows.  It’s not a new concept.  A lot of companies have tried to in a way digitize gold, but we believe the Ripple Network is what’s going to make it come true because it’s so fast and so robust.  It’s currency agnostic.  It’s a great plan.  If and when we make it happen.  It gives you the opportunity to come into this world and leave out of it with something tangible. And this is a new concept that you haven’t seen.  We’re the first ones to do this.”

R: “Basically it says what we are.  Like I’ve said, I’ve been a gold bug for a while.  Silver and gold and all of that.  Some people took some profits, and it’s going to keep going.  I see more values preserved in precious metals and hard assets than in fiat currency.  And that’s what we want to marry. We want to marry digital currency and hard assets.  They compliment each other very well and people trust it more.

C: Can you give me an example?

R: “If five years ago you bought one ounce of gold, and you kept the equivalent of the gold in the bank.  That money would not buy you the same thing even a year ago.  But that ounce of gold has grown more than 200%.  It’s a great way to preserve and store your wealth and ensure your buying power is not diminished by some crazy, financial scam.”

C: Why the Ripple Network?

R: “First of all I want to raise awareness about Ripple Network.  I do believe that it’s going to be the best innovator of this decade when it comes to payment systems and payment network.  I know I’m going to get a lot of heat from bitcoiners for saying that, but this is what happens.  Bitcoin was the trailblazer and paved the way for this to happen.  So, what I want is to show the world that you don’t need a bank. You’re able to conduct transactions across the world whether with hard assets or fiat money through the cloud.  We’re basically our own banks now, thanks to Bitcoin, thanks to Ripple Network, and all new innovations coming along.”

C: Why are you really doing this?

R: “I believe that after your wealth, your money, after it has been taxed and you’ve contributed to your country’s progress…  Why shouldn’t you be able to do whatever you wish with your money? Why can’t you store it, exchange it, whenever you want?  Why are their limits?  That’s what I want.  The world needs to wake up.  We don’t need the current financial system as it is.  Don’t get me wrong.  There are many good aspects, but we can take the good things out of it and implement them in this new digital economy we’ve got going on and make everything work better.  But this monopoly of the financial system is crazy.  I want to contribute to the side of the aisle that says we can have more freedom.  One system does not fit it all.”

C: Any thoughts for those who want to get involved in cryptocurrency for the first time?

R: “They should learn, first of all, about the digital currency ecosystem.  Learn about Bitcoin.  It was the trailblazer.  See what happened with it. Knowing how it came to reach critical mass and why people put value in it is very important.  And then learn about the Ripple Network.  Honestly, it’s going to be the next big thing.  I see the Ripple Network replacing ACH banking in the U.S. I honestly believe that’s what’s going to happen.  After that, figure out what it is you want.  Just pick one, get your feet wet.”

C: Why should someone choose NoFiatCoin over Bitcoin and other cryptocurrency?

R: “The way that we have developed our system is it will be shielded from external forces.  Every now and then you hear about a government that scares cryptocurrency enthusiasts into trying to figure out what’s going to happen now.  We’re developing an ecosystem, even if governments decide financial institutions can no longer provide services to these crypto guys, well guess what.  We still survive because we basically redeem our own balances.  You can come back to us and leave with hard assets.  It’s just something different.  And it’s shielded and really protected from any kind of pressure from the outside world.  And that’s the advantage.  We’re going to be more secure.”

C: You’ve taken a lot of heat from people, especially Bitcoin enthusiasts.  Do you have a response?

R: “They call us a scam and the arguments… I can’t wrap my head around it.  Basically, they’re saying anyone can create a digital currency, and that it doesn’t have to be backed by hard assets because the value comes from flexibility and speed and all that stuff.  They’re saying we’re a scam because we actually have accountability.  We put a face to our project and back our currency with hard assets.  It’s just crazy.

C: What are you hoping to accomplish with NoFiatCoin?

R: “We really want to have the best of all worlds.  We want the benefits to come along with being a digital currency so people give it value because you can move it faster and transact across all borders with minimal fees (or none at all).  And, we want the benefits of gold and silver, tangible assets that people trust and believe in. Even with fiat money, it’s still important and it’s not going to disappear.  You still need fiat and you still need gold.”

What do you think? Is NoFiatCoin the better cryptocurrency?  Share your thoughts in the comments.

[…] The currency was launched on January 6, 2014, and it’s received quite a bit of attention.  And the name says exactly what it is.  Essentially, they’re combining the best of cryptocurrencies with hard assets.  That’s right.  A cryptocurrency backed by bullion.  They are using the metals as a trust and stability mechanism for alternative currency. Read More […]