Researchers at the University of Texas in Dallas have developed a method of utilizing an untapped wave spectrum to enable mobile devices to see through wood, plastic, and even walls. 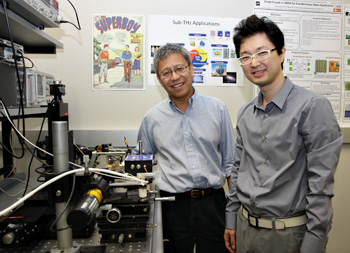 The team has developed a microchip that will allow images to be created using signals in the terahertz spectrum, which lies between the microwave and infrared wavelength spectrums. With the new technology Terahertz waves will be picked up and translated into images by a microchip that shares many of the same components as modern electronic devices, such as computers, mobile phones, and home gaming consoles. Until now, very few consumer devices have been able to utilize this spectrum.

Developers of the technology believe consumers will be able to simply attach the imaging chip to the back of smartphones, which will then display the x-ray images on the device’s screen. The microchip has specifically been manufactured with the same complimentary metal-oxide semiconductor (CMOS) technology that can be found in mobile devices today. The material makes the chips both cheap to manufacture and highly compatible.

Dr. Kenneth O, professor of electrical engineering at the university and director of the Texas Analog Center of Excellence, believes that the technology can be used to find studs in a wall, verify embedded watermarks in currency and important documents, and even detect cancerous tumors. Dr. O acknowledged that the potential uses of the new microchip are nearly limitless. “There are all kinds of things you could be able to do that we just haven’t yet thought about.”

This undoubtedly raises a few privacy concerns, which the team is currently circumventing by limiting the microchip’s range to less than four inches. But once it’s out in the wild and into the hands of consumers everywhere, it will likely be a different story.

You can bet that news outlets will be running wild with this potentially invasive technology once it reaches the public, but for now let’s just enjoy daydreaming about how cool it’ll be to finally see all the weird stuff that’s fallen behind the fridge.

Se.cret.ly: This Link Will Self-Destruct