Tech being used to prevent harmful algal blooms in Midwest

The Midwest may be out of the reach of rising sea levels, but it’s not beyond the reach of global warming altogether.

In 2014, 400,000 residents around Toledo, Ohio, awoke to notices telling them not to use the drinking water. A harmful algal bloom (HAB) had infected the water supply making it unsafe for citizens to use, let alone drink. HABs are blooms of algae in lakes or reservoirs which can cause vomiting and diarrhea; until now the cause of them had been isolated in fertilisers used in farming being washed into slow-running or still water.

The concern has always been more acute for the Midwest, with its high dependence on farming and water supplies coming from lakes and reservoirs. But now global warming is adding to the problem in two ways.

Firstly the increased precipitation levels are causing more fertiliser to be washed into the river system: between 1958 and 2012 there has been a 37% increase in Midwest precipitation levels in “very heavy events”. Secondly, the slight increase in temperature is making it doubly easy for the algae to bloom, the two effects combining to impact between 30 and 48 million US citizens.

The same phenomenon which causes HABs to appear around the Midwest also causes the annually reported Dead Zone in the Gulf of Mexico. The algae blooms and then dies, leaving the water short of enough oxygen to host life. This year’s was the biggest on record. 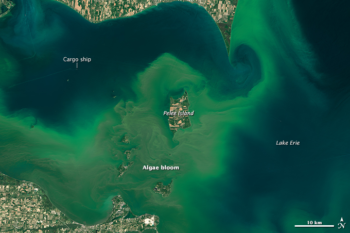 This prognosis isn’t a cheery one, especially with Trump’s stance on climate change and the Paris Agreement. But a combined technology effort is now underway and showing promise of countering the trend.

The first step is to monitor the situation using the US’ vast network of satellites. The resources of NASA, the US Geological Survey, the National Oceanic and Atmospheric Administration (NOAA) and the Environmental Protection Agency, have been brought to bear on a project which will allow satellites to signal colour changes in the nation’s lakes. HABs tend to be bright green, and earlier this year satellites managed to spot a bloom forming in a lake in Utah before officials.

Then, in Lake Erie, this data can be combined with the environmental sample processor, which is basically a little island built in the lake which can continually test the water to verify satellite data.

The approach is one of necessity. Run-offs from farming will probably never go away since whatever makes crops grow will also make algae grow, no matter how organic it is. The phenomenon has given us a fight which will have to be continually managed to keep the human population safe.