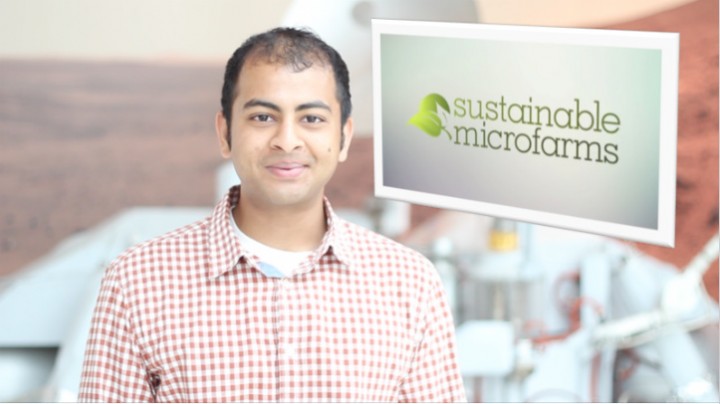 “We will disrupt the industry”, “we will empower people”, “we will even end world hunger!” are all usually empty startup mantras as ubiquitous as the drone of millions of Powerpoint presentations. When a startup comes along remotely capable of any such feats, they are usually unspoken and so it is with Sustainable Microfarms, a company that is disruptive, empowering and may have a hand in ending world hunger.

Sustainable Microfarms is a hydroponics startup that is taking a systemic approach to disrupting while simultaneously empowering the agriculture industry and all the players involved. They are starting with a small but passionate consumer market, the urban hydroponic farmer. To say that Sustainable Microfarms is another hydroponics company is to say that Tesla is just another electric car. They have developed new technology (the Genesis Controller) that automatically monitors plants 24/7 and takes the required actions to maximize health and growth. It is an ingenious system that monitors, pH, nutrient levels, temperature and electrical conductivity, then delivers doses of pH and nutrients in the most effective amounts at the most effective times of the day, for each type of plant.

This is a true plug and play computerized system that eliminates most of the labor and all of the guesswork from hydroponic agriculture, not only for the small urban hobby gardener but for larger commercial enterprises in a manner that scales massively both in terms of operations and geography. The result? The best friend a hydroponics farmer can have to help reduce water usage by 90% and nutrient requirements by 70% while increasing yield output by a factor of 10 over over soil-based farming. Most startups have models that reduce costs or increase revenues. Sustainable Microfarms does both.

The company was founded by CEO Sanjay Kumar Rajpoot who studied Economics, Physics and Chemical and Nanotechnology Engineering while at USC. No academically imprisoned theorist floundering in the real world, Sanjay has also tended bar, started a food truck business and was a Mixed Martial Arts fighter. With that background it is no surprise that he questioned why long standing hydroponic technologies were not being used to address commercial scale agriculture and global hunger issues. The short answer is that there are cultural, technological and financial barriers. The Sustainable Microfarms technology makes, as Sanjay has stated “…the most efficient farming methods simpler, more accessible, and more economical”. While measurably more effective than any long-standing competitor, it is also 400%-500% less expensive.

The secret sauce is that the Genesis Controller technology dramatically improves results, cuts costs and increases revenues while using far less resources, especially water. When you think about that and how this is a solution that is also not bound by geography, soil or weather conditions, you realize the global impact that is possible (yes, that ending world hunger idea does not seem so far fetched now).

As COO Alice Zhang told me over a hand-crafted coffee at a cafe in Berkeley last week “We are hungry, passionate, and setting out to disrupt a space that’s thousands of years old and in desperate need of sustainable innovation to reverse the negative effects of Agriculture 2.0″.
Strategically it is going to be interesting to see how the company’s product line develops and the partnerships evolve as both the tech and agriculture industries take notice, and they will.

Sanjay’s final comment to me was perhaps his most profound on multiple levels, “When I am an old man, I’d like to make sure that when kids hear the word ‘apple’ they think of fruit.”