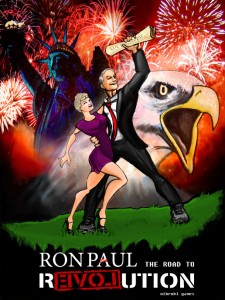 It was the internet that allowed fringe candidate Ron Paul to explode in popularity, becoming at a certain point a serious runner in the 2012 Republican primary. So perhaps it’s fitting that he will be immortalized in a video game.

“The Road to REVOLution is a sidescrolling platformer action/adventure game, reminiscent of console classics like Super Mario Brothers and Sonic the Hedgehog,” reads the project’s page.

The game will feature battles with 13 bosses, each representing a branch of the Federal Reserve, the central banking system of the United States and perennial target of the Texas senator. The game will be programmed in HTML5, and developer Daniel Williams hopes to port it to iOS and Android.

Williams, who also designs t-shirts, has set an ambitious early-summer release date for the project, with a beta expected in June and the final release expected for July.

It’s difficult to judge the tone of the game from the Kickstarter page, but it appears that the game will be humorous while supportive of the septuagenarian Texas senator. A promotional poster shows Paul in an action pose with a grey-haired woman, presumably his long-time spouse Carol Wells.

The project description comes close to connecting the theme of indie game development with Paul’s libertarian ideology, but falls a little short.

“Through this game, and others, my sincere hope is to perpetuate the spirit of Indie Games, which I feel is sort of the last bastion of ‘Free’ gaming,” Williams wrote. “There is so much red tape that game developers face in the world of gaming today that destroys what may have been some of our favorite games.”

Screen shots of Williams’ current work on the game show blocky characters climbing on floating islands against backdrops that, according to Williams, will be artistically based on the 50 United States.

Williams has expressed surprise at the degree of media attention the project has garnered.

“Something crazy is happening, ABC news, Fox News, CBS, and now my local NBC affiliate all contacted me today about the video game,” he wrote on Facebook.

The Ron Paul campaign has not released a statement regarding the project.

German Court: Google Must Filter YouTube In Germany. But How?

RFID Will Grow… To Track You Everywhere?