A new “personal network” called Path launched about a month ago to great fanfare. It’s backed by the likes of Shawn Fanning and Ashton Kutcher, so it’s gotta be good, right? Debatable.The good people at ReadWriteWeb summarize it perfectly in their article titled “10 Surprising Things you can’t do on Path“, and here they are: 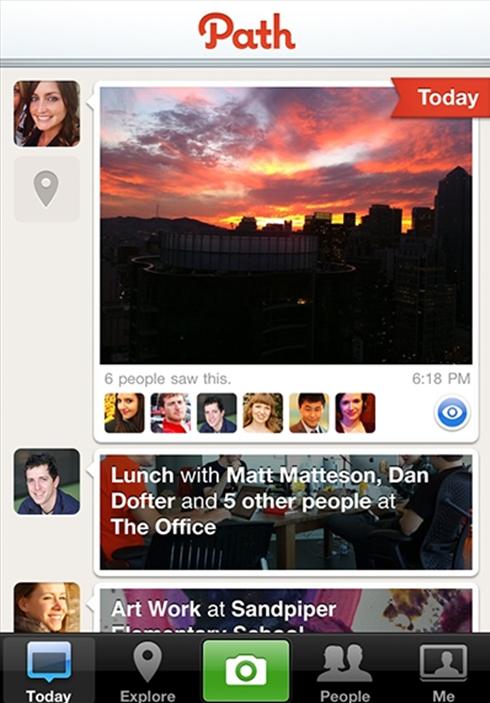 2. You can’t publish photos from your phone’s camera roll

5. You can’t navigate by the tags you’ve added to photos – it’s unclear whether you can even add more than one Thing tag to a photo

6. You can’t see tags or captions once you’ve got a photo expanded

7. You can’t opt-out of email notifications from Path – and though emails say you can “pause” individual users, it’s not clear how to do that

8. You can’t visit a person’s Path profile page if you’re not already friends with them

9. You can’t apply any filters or crop photos

10. You can’t add friends on the web site, not even if they’ve already added you

The founding fathers of Path are touting such attributes as features rather than faults. I can’t say I agree with them in full, however Path will be a nice deviation from Facebook’s clutter, and its simplicity and user interface – especially its mobile app – give Twitter a run for its money.

Another fun fact: You can’t use the service unless you have an iPhone! Really? They are launching a service without including an Android app – the device that was bought by over 20 million people in Q3 alone! Cheers to Apple, whose marketing is so good that any influencer in their right mind wouldn’t stray from the precious iPhone. (Yes, I’m a Android user. The Samsung Fascinate is phenomenal — despite its terrible name.

Possibly. I think it all depends on its marketing strategy, specifically its adoption strategy. With such an all-star line-up, I assume they’ve got some tricks up their sleeve; however, aside from Kutcher and Vaynerchuck, the majority of them are VCs and developers – professions that aren’t exactly known for their marketing capabilities.

In conclusion, Path is nothing disruptive. Its success is dependent on influencing the influencers to adopt it for its high-profile appeal, not its technological functionality. I don’t doubt that they have the ability to do so, however its definitely an uphill battle.

I've gone back and forth with Path, and I have to say I wasn't too floored when they launched. To me, any company that receives about 2.5 million dollars and makes an iphone photo-sharing app is a little ridiculous.

Now, however, I see what the people at Path are doing. They are fbook alums, and realize that the social graph now is distorted by meaningless, trivial friendships. They borrow from evolutionary psychology to suggest that we have a max of 50 close relationships, and they want to make a social network that uses those relations.

Tldr; the data is much more valubale if the relationships people have on the network mean something.

I don't know what their future plans are with it, however the investment does seem a bit generous. The value thus far seems to be in the people behind it, and not the product itself.

However, this issue is not just isolated to Path. From what I've been researching, there seems to be a valuation bubble surrounding all social media companies. I detail that assertion a bit more in this post:

Aside from the investment, the logic behind the product is definitely there. Path should see some success, but my guess is that it will remain a niche product, never reaching the mainstream. What will be interesting to see is if that niche will be profitable, as well as sustainable.

Path.com also spams and signs up people for its site that are not even members of its site and who do not even use the app on their phones!

Then they don’t even have an option to opt out or disable your account or their emails without creating an account on their site, and then even that does not work.

I’ve seen this sort of shady email marketing before with porn/dating sites and it’s very annoying since like path these sites state that you must login to disable your account and stop reciving emails from them but then your login/password for the site-if you even signed up for the site in the first place!-do not even work!