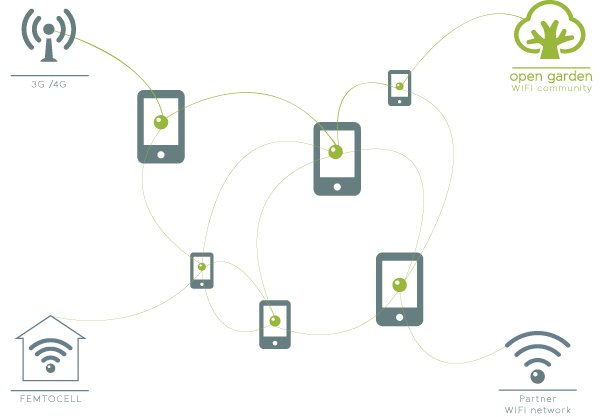 Desperately need to check your email, but there’s no WiFi to be found? Maybe there’s a good samaritan in the area whose phone is operating as an open hotspot. That’s the vision, anyway, for Open Garden, a San Francisco-based startup that wants to crowdsource connectivity.

Technologically, the idea behind the app is to share web connections, using internet-enabled devices to discover and guide users to what they call “offramps” – a patchwork of WiFi hotspots, 4G base stations, and femtocell deployments that will work as online wellsprings.

The project is clearly based on a set of strict ideals about information access: “The universal availability of information results in liberation,” reads the site. “Regardless of whether you were born in New York, Shanghai or Cairo, access to the Internet can transform your life.”

The goal, founder Micha Benoliel told Techli, is “free wireless broadband all over the globe to improve access to knowledge, stimulate entrepreneurship and innovations.”

Also at work is a clear distrust of service providers, which Benoliel calls, in relation to the name of the project, “closed gardens.” If Open Garden succeeds, it will break down some of the walls between the gardens, increasing access for everybody.

A potential challenge to the project is what social philosophers call the tragedy of the commons: with limited free resources, it only takes a small number of bad apples to take much more than their share and decrease the quality of the experience for everybody. But Benoliel, who previously founded Digitrad Communications and says he enjoys metaphysics and music, thinks that the makeup of offramps is such that more users will only improve the project.

“Open Garden will benefit from [the] network effect,” he said. “The more people join the network, the better connectivity and capacity you can achieve. More people means more opportunities to access WiFi offramps through our multi hop technology. Exiting through a local wifi off ramp provides you with free connectivity.”

Open Garden launched last month at TechCrunch Disrupt. Benoliel plans to keep the service free, though it’s possible that in the future, choice features like VPN access will be made available for paying customers.