Support The Network For Teaching Entrepreneurship At September’s Back To School, Back To Business Benefit 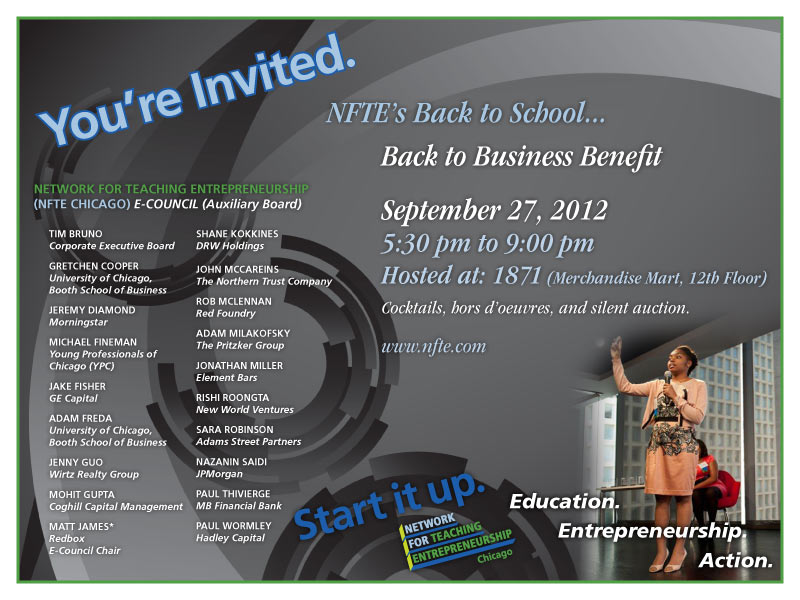 Next month the Chicago branch of the Network For Teaching Entrepreneurship (NFTE) is holding a Back to School, Back to Business benefit, whose proceeds will help support the organization’s efforts to educate young people about building their own businesses. The event will be held the evening of September 27th in Chicago’s 1871 startup space.

According to the organization, NFTE has educated more than 13,500 Chicago Public School students since 2003. NFTE estimates that, with help from member donations and events like the upcoming Back to School benefit, next year it will be able to reach 1,500 in 32 schools across the Chicago area.

NFTE was founded by Steve Mariotti in New York City in 1987, and currently has offices in several key cities across the US. Mariotti came up with the idea for the program during his time working as a school teacher in NYC in the 1980s. Mariotti was in charge of the high school’s dropout program and found that students were most interested in his class when he told them about his entrepreneurial efforts prior to becoming a teacher. Mariotti’s aim is to make sure that, by the age of 18, every child has the entrepreneurial knowledge that will allow them to one day start their own business.

“NFTE’s Back to School, Back to Business Benefit is an incredible opportunity for Chicago’s entrepreneurial community to come together for a fun evening while supporting NFTE’s work to create the next generation of entrepreneurs and business leaders,” said Lauren McLaughlin Joyce, deputy director of the NFTE in Chicago. “This year, we are thrilled to be hosting the event at 1871 – potentially the future offices of NFTE alum’s businesses!”

Next month’s event will run from 5:30 until 9:30 pm, featuring cocktails, networking opportunities, and a silent auction. Tickets for the event run for $60, but if you pick one up by the first of the month you can save $10 off the full price. Head over to the organization’s official website to find out more about supporting NFTE and further details about the upcoming Back to School, Back to Business benefit.