The Redmond-based developer commissioned a report from analyst firm IDC which projects steep growth in decentralized, web-based services in coming years. And total revenue from cloud-related innovation will top some $1.1 billion by the end of that period, according IDC’s numbers, with many of the new jobs settling in China and India.

“For most organizations, cloud computing should be a no-brainer, given its ability to increase IT innovation and flexibility, lower capital costs, and help generate revenues that are multiples of spending,” said John F. Gantz, chief research officer and senior vice president at IDC, in a statement.

Microsoft, which has marketed many iterations of the Windows operating system with images of billowing clouds, is banking heavily on Office 365, a suite of web-focused office productivity tools imagined as the cloud successor to the longstanding Office line. Given that focus, there’s no doubt the company wants to benefit from as many of the new cloud jobs as possible.

It’s not yet clear, though, how the service will compete with rapidly-maturing free versions of similar web-based office suites like Google Docs and Zoho.

The report also predicts cloud computing will account for an optimistic 1.2 million cloud-related jobs in the United States and Canada – a figure, for referenced, on the order of the total number of jobs gained since the trough of the mid-2000s recession.

“A common misperception is cloud computing is a job eliminator, but in truth it will be a job creator–a major one,” Gantz said. “And job growth will occur across continents and throughout organizations of all sizes because emerging markets, small cities and small businesses have the same access to cloud benefits as large enterprises or developed nations.”

The cloud is a loose term for an array of service-based, frequently collaborative computing platforms, popularized by services like Google Documents and hastened into a widespread software phenomenon by the rise of smart phones and user-friendly web services. At the heart of the idea is the notion of computing as a service, like a electricity or water, rather than a product purchased in a box.

The initiative could be interpreted with a subtext of desperation, as Microsoft struggles to overcome a reputation as an ugly, de facto industry and consumer standard, even as the Windows 8 consumer preview earns solid reviews.

Microsoft will help you, the press materials seem to whisper, if the cloud helps Microsoft. 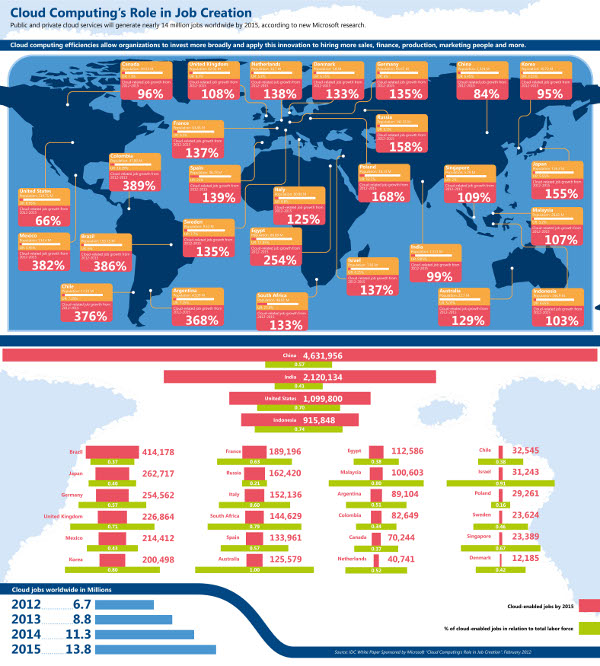 Fluent: Pay For Actions Not Clicks

How To Price Your Web App