Home > Blog > Save Your Eyes During Late Night Coding Sessions With F.lux

Save Your Eyes During Late Night Coding Sessions With F.lux

Working late into the night in front of a computer screen is increasing eye strain. Thanks to the growing number of computer and mobile screens, optometrists report seeing more patients with symptoms of eye strain than they were five years ago. If you want to save your eyes from the irritation that comes with late night screen time, you can either buy some super dorky glare-reducing glasses, or you can install a program called f.lux.

To use f.lux, simply set your location and adjust the day and night lighting according to your preferences. F.lux can be used at any time, although it takes a few days to get used to – some people on Twitter revealed that at first, they thought their computers were dying. Despite the transition period, many users swear by it. 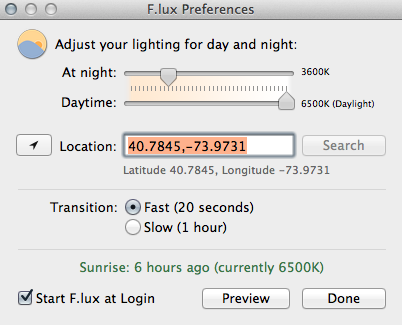 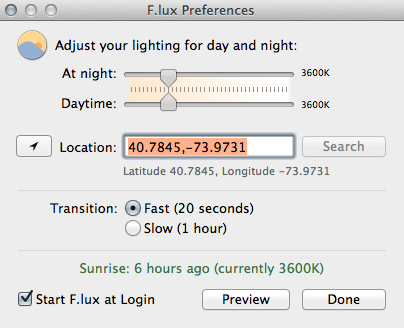 According to a study published in the European Journal of Physiology, bright light emitted from a computer screen can suppress melatonin – a hormone created by our bodies that helps us go to sleep –  excretion more than dim light does. By transforming the blue light of screens into a warm hue, f.lux allows you to stay up and work on projects without messing with your sleep cycle long term.

Michael Herf  – who cofounded and sold his photo sharing app Picasa to Google in 2004 – created f.lux in early 2009 to help his wife, who was working late into the night.

We had built a daylight-colored workspace for my wife (Lorna), who's a painter. She was working late at night, and when she came downstairs to our normally-lit living room, she noticed all the computers were glowing blue, like the light upstairs. I said, I know how to fix that! And....f.lux happened.

Herf solved the issue for both his wife and over 3 million other late night workers who have downloaded the software. Since then, Herf has worked on a number of projects including IM Melting and Disksum, which can be found on his website Stereopsis. Recently he's responsed to requests for a mobile version of f.lux as users spend more time in front of mobile device screens. To access f.lux for iOS devices, users have to jailbreak their phones to install the software via the Cydia store.

Overall, f.lux has the potential to save you money on trips to the optometrist and eye drops. I've been using when I need to use my computer before bed  for the past few weeks on my MacBook Pro and I'm already feeling less irritable and wired. If you are one of the millions of computer users who suffers from eye strain, you've got to check out f.lux.

How To Celebrate 4sqDay Around The World