KIVA Systems Automates The Warehouse, Saves Your Back 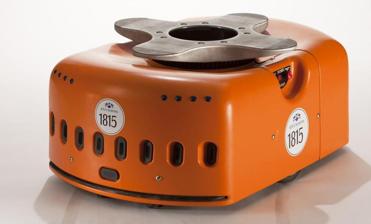 Massachusetts startup KIVA Systems is out to revolutionize the day to day operations of warehouses everywhere. The company has developed a simpler way of organizing and picking orders for customers using a computer inventory system, paired with short automated orange robots that move throughout the warehouse, bringing the appropriate shelves to a packer who then puts the orders together by hand. Shelves queue up at the assembly station and the computer tells the worker which order each item should be placed into, organizing up to six different orders at a time.

The robots navigate the warehouse by reading barcode stickers organized on the floor with on-board cameras, telling them where to go to find the specific shelf it’s looking for. When a robot finds the right shelf, it slides into place underneath and spins to effectively screw the shelf onto the top of its body. This motion allows the shelf to be moved without too much jostling, eliminating the potential for items to come loose. The computer system manages the movement of each robot and makes sure that they never get in each other’s way or collide.

The best thing about KIVA’s system is that it takes care of one of the most stressful activities in any warehouse: space management. The computer system makes sure that high-demand items are never buried behind other racks, and alternatively tucks away anything that isn’t pulled very often in the back or in higher spaces.

This year KIVA was named number 23 of Fast Company’s 50 Most Innovative Companies in the World. Many huge eCommerce companies have already started embracing the new warehouse automation technology, including Gap, Crate&Barrel, Walgreens, and Staples. Just this week Amazon announced that it will be acquiring KIVA Systems, a deal reportedly worth $775 million.

Having worked in a warehouse for half a year, I can tell you first-hand that it’s a pretty miserable job. The stress of organization alone would make upgrading to an automated KIVA System completely worth it. Not to mention the fact that I would’ve had no problem letting KIVA’s robots do all that heavy lifting for me.