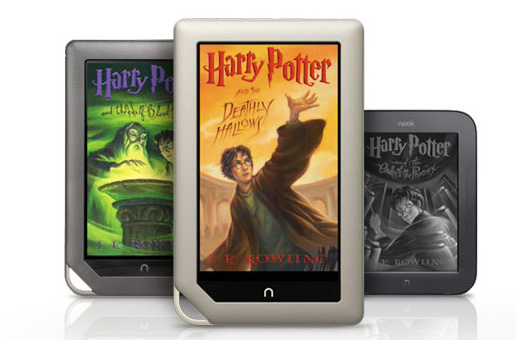 This week the beloved Harry Potter series arrived on e-readers everywhere, nearly five years after the final book was published in hardcover. Both Amazon and Barnes & Noble announced Tuesday that all seven books will be available to read digitally on their Kindle and Nook e-readers, respectively.

Surprisingly, the books will not be sold in either online retailer’s e-book stores, but must be bought through author J.K. Rowling’s Harry Potter website, Pottermore. The all things Potter website was announced last June and is currently still in its beta stage, with open registration beginning in April of next year. Readers looking for Harry Potter e-books will have to buy them individually in the Pottermore Shop, ranging from $8 to $10 each, or as a complete digital package for $57. Copies of the books can be sent to approved eReader devices, including smartphones, in the popular ePub format.

If you’re anything like me, the first thing you thought upon hearing the news was, “They weren’t available as e-books already?” Rowling explained that the delay in moving the Potter series onto digital devices was largely due to piracy concerns. Over the years Rowling has expressed that she wanted her fans to enjoy the series as she had always meant it to be read – in a tangible, traditional book form. The hugely successful author believes strongly in the traditional aesthetic process of writing over newer technology, having reportedly written the entire Harry Potter series by hand.

The move to e-book format is a big step for the already staggeringly successful franchise. As of last June, the series has sold more than 450 million copies, and the books have created the highest grossing film franchise of all time. Taking into account all of its iterations and merchandise, including a 20 acre theme park at Universal Studios in Florida, to date the Harry Potter brand is worth an estimated $15 billion.

Anyone who has been holding off on the popular series because they didn’t want to carry around a bible-sized children’s book no longer has an excuse, myself included.

Deadsoci.al Lets You Send Creepy Messages From The Afterlife

Google Launches Tool To Creep On Yourself