Groupick Says: “If You Can’t Pick, Ask The Group”

Chicagoan Jason Shah is the creator of the Android App, “Groupick” the app that says, “If you can’t pick, ask the group!”

Shah refers to Groupick as a cross between Survey Monkey and Hot or Not and after playing with the app for awhile, I’d say he is pretty close to the mark.

In the Android App store, do a search for “JSDF” and all of Shah’s apps will come up. “I’ve been programming computers since I was 11,” said Shah, “and I enjoy coding. Learning to make apps was a logical next step for me.”

Right now Groupick is clearly aimed at being a sort of mindless entertainment. Every time the user makes a choice between 2 and 4 items, a new question pops up for them to decide on and it gets pretty easy to lose an hour just choosing between the newest options.

“Our average users spend half an hour using Groupick and we currently have had over 500,000 picks made along with over 10,000 comments and 7,000 questions created. We get almost 100 questions a day uploaded to Groupick and right now we view it as entertainment and experimentation.”

I pointed out to Shah that those kinds of data points could be useful to advertisers; knowing whether or not a person prefers one thing over another is very valuable. Shah just looked at me and said with a smile, “Yes, I know.” He declined to elaborate further on whether or not he was going to seek to monetize but did he say the future might hold a “Prosumer” (professional consumer) option for Groupick and advertising also may play a part.

The way Groupick works is simple; user create questions with 2-4 choices as answers along with some pictures that can be uploaded from their phone, computer or the Internet.

Once a question is uploaded, the question can be shared on a users’ Facebook wall for instant feedback as well as being shared with the Groupick community at large.

Groupick is available on its website at Groupick.com or through the Android app. Both properties are tied together so an answer made on the app is shared with the site so the results of all the voting count together.

“The way I like to describe it,” said Shah, “is that you picture yourself in a bar with a buddy. You get into a debate on who would win in a fight, Iceman or the Green Lantern? You post it to Groupick and within minutes you have comments and opinions on who would win.”

Groupick is a two person team consisting of Jason Shah and his wife, Reshma.

“I’m the coder,” said Shah, “and Reshma helps with ideas and implementation.” Looking down the road, Shah can see Groupick possibly being integrated into other applications or even used as an analytics tool.

“We are still in beta, so we keep tweaking it and improving the model,” said Shah, “and then we’ll see what happens.” 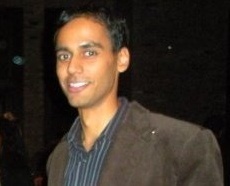