Like a bunch of tweens trying to get into a Justin Bieber concert, tech enthusiasts everywhere are scratching and clawing for invites to Google+, the social networking service that Google launched into field trial on June 28th. With social circles, group video chat, and most importantly data portability, I’m here to tell you that this is no hype. Google+ is the real deal, but its going to take a focused penetration strategy to make sure this billion-dollar startup gains the traction it deserves.

If you haven’t read up on Google+, here are a few links to get you started.

Google Takeout, An Easier Way To Take Your Data With You (TechCrunch)

The One Google Plus Feature Facebook Should Fear (AllFacebook)

After logging on last night for the first time (Thanks to my Google friends for the invite!), here’s my analysis on what Google+ is going to have to do to gain traction and chip away at Facebook’s market share. 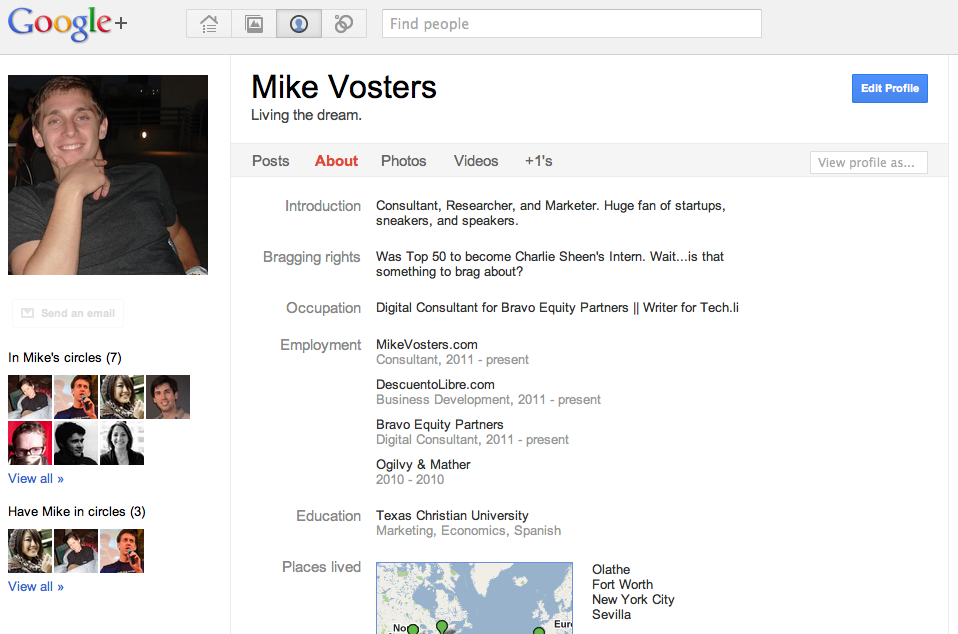 What people need to realize though is that Google+ is a startup. Yes, it’s backed by one of the biggest and most trusted brands in the world with essentially unlimited funding (wouldn’t that be nice?), but it does not have an easy path to success. Google+ enters an incredible crowded social market with a Goldman Sachs-backed 900-pound gorilla named Facebook that will go to hell and back if it has to in order to stop Google+ from gaining market share.

So what’s their penetration strategy? I am no insider, but here is my take on the situation:

1) Google Suite Integration: Google’s biggest competitive advantage is not the sweet new features Google+ brings to the social table (although they are phenomenal), it’s the suite of trusted Google products that have been around for years – Search, Gmail, Google Docs, Android, News, Calendar, etc.

Imagine logging on to Google+ and being able to edit spreadsheets, manage your calendar, receive curated news, hold video conferences, share content, search, and build/maintain relationships all in one seamless experience. Better yet, you’d be able to do all of the following for both your work and personal life. That’s BIG, and most importantly it’s something that Facebook will not be able to duplicate anytime soon even with all the developers they stole from Google.

Google has already taken a big step towards integration by incorporating a Google+ notification icon in the top right of the navigation for many of their products. This makes a huge statement, however its the seamlessness of such implementations that is the make or break.

2) Google+ for Business: Circles are a huge deal. Yes, Facebook can copy them and put the functionality closer to the core of their product, but what they can’t do is alter their brand. Facebook is a social product. All Zuckerberg talks about is how their goal is to connect people and help them become more social. In doing so, their brand is alienated from ever moving into the world of business, which is a huge part of everyone’s life.

For the millions of people sitting at their desks each day using Google products, Google+ is the greatest thing since sliced bread. Now, they don’t have to have trigger-happy fingers on ctrl+tab to switch their browser tab every time someone walks by their cubicle. They can use one platform for all aspects of their life.

Google needs to leverage this brand advantage and complement it by making business-friendly features a priority in the development line-up. I’m talking about private hangouts with added security for business conferencing, enterprise-class group messaging through Google Huddle that instantly creates groups for all departments through an interactive org chart, and curated company news that delivers both internal and external news in real-time through Sparks.

If they do that, they’ll win over everyone during business hours, which should translate into windfall social traffic afterhours.

3) Mobile: The current Google+ mobile app is nothing special and leaves Facebook with nothing to worry about…until the next wave of Android devices gets rolled out anyway.

Assuming Google is as smart as I think they are, a comprehensive social integration is already in the works for the Android operating system, which is now being activated on over 500 thousand Android devices each day. This can and should include one-click shortcuts to share and interact with circles from search and beyond, comprehensive sync of mobile and web apps, and potentially a complete abandonment away from SMS, instead pushing all messaging through the Google cloud (Gmail, Huddle, Hangouts, Google+, etc.).

Implement the previous and an array of other things and there would be no reason whatsoever for Android users to spend time on Facebook. Not to mention, iphone users won’t have much incentive either now that Apple made Twitter its social network of choice.

In summary, Google+ is not a Facebook killer, it is merely the social piece of Google’s puzzle. Alone, it is nothing; but if Google can seamlessly integrate it amongst its suite of world-class products that are already used by over a billion people, the company that is going to come out on top in the social game is a no-brainer.

Network Before You Network With Social Tables