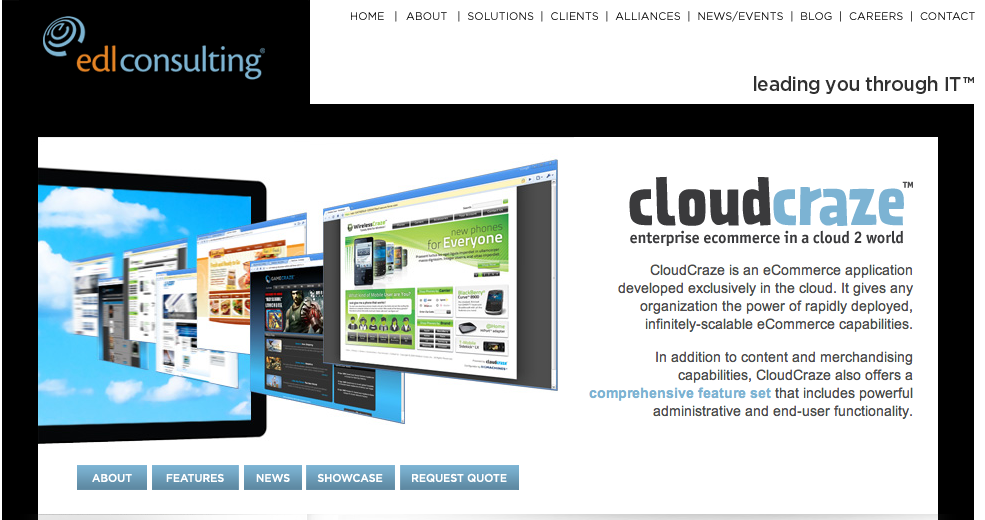 Northbrook, IL November 9, 2010Flyover Geeks first wrote about CloudCraze back in October: EDL’s CloudCraze Levels Ecommerce Playing Field. Since that time they have continued to grow in influence.

EDL Consulting is a Gold Sponsor at Dreamforce 2010, the cloud computing event of the year, at Moscone Convention Center in San Francisco December 6 – 9, 2010. Booth #812 will have a CloudCraze 2.0 demo and offer a chance to speak with the product experts.

Since the initial release of CloudCraze in the fall of 2009, customers have launched cost-effective eCommerce sites around the world to sell to both consumers and businesses. Built natively on Force.com, CloudCraze 2.0 enables customers to integrate easily with other processes such as CRM and ERP. CloudCraze can be administered simply by non-technical team members.

“EDL has been the ideal technology partner and CloudCraze has made it easy to launch the eCommerce site and capabilities we always imagined,” said Mark Kendell, manager information services at Chipworks. “Of the companies we considered partnering with, EDL was the one who both understood our specific technical business needs and had a proven path to fast and comprehensive deployment on Force.com.”

“EDL has been a longtime salesforce.com partner and was an early eCommerce app developer on Force.com,” said Kendall Collins, chief marketing officer at salesforce.com. “CloudCraze is another example of EDL’s continued innovation and commitment to customer success via the AppExchange.”

“While the customer response to CloudCraze has been terrific over the last year, we are excited to have incorporated these new features into CloudCraze 2.0 and keep innovating ahead of the industry,” said Bill Loumpouridis, consulting president and CEO at EDL. “CloudCraze 2.0 is a comprehensive eCommerce offering that can be rolled out in just weeks and significantly reduces development, integration and administration costs.”

About the Force.com Platform and AppExchange 2
Force.com is the only proven enterprise platform for building and running business applications in the cloud. The Force.com platform powers the Salesforce CRM applications, more than 800 ISV partner applications like those from CA Technologies, FinancialForce.com and Fujitsu, and 170,000 custom applications used by salesforce.com’s 82,400 customers such as Japan Post, Kaiser Permanente, KONE and Sprint Nextel. Force.com also enables developers to make any enterprise app social by leveraging the social collaboration components including profiles, status updates, and real-time feeds available with Chatter.

Applications built on the Force.com platform can be easily distributed to the entire cloud computing community through the salesforce.com AppExchange 2 marketplace, now featuring the ChatterExchange.