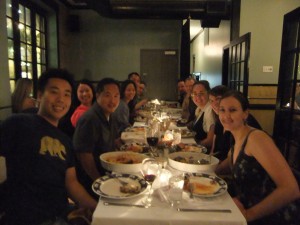 If you are new to the city, looking to build new friendships, or just plain love food, there’s a new social networking group for you! Grubwith.us takes the social networking concept and turns it inside out. The website, whose tag line reads “the social dining experiment”, seeks to bring your social online network, offline. GrubWith.Us works with restaurants to provide diners with a group dining experience at some of Chicago’s best restaurants. Adventurous eaters are rewarded with a discounted meal, great food and new friendships!

The Grubwith.Us concept is the brainchild of founders Eddy Lu and Daishin Sugano, recent Chicago transplants from Los Angeles, California.  During the day they own Illinois’ inaugural cream puff bakery, Beard Papas.  As recent transplants, Eddy and Daishin felt the best way to meet new people is often over food, thus GrubWith.Us was born.

To test out the social dining concept, I attended a GrubWith.Us dinner with eleven other diners at the Lincoln Park Italian restaurant, Sapori Trattoria. The atmosphere was light, friendly, and the family style plates were overflowing. If you had any trouble starting a conversation, you could ask the other diners to share the “interesting fact” printed on the back of each person’s name card. Diners who attended the event were new to the city, decided to come on a whim, or came at the request of a friend. All the diners were enthusiastic about the experience.

“The entire experience exceeded my expectations.  Everyone there was very friendly, and of course, in the mood to meet new people and enjoy good conversation.  Our four-course dinner was excellent (I had plenty to eat even as a vegetarian), and the chef even gave us extra dessert off the menu.  At the end of the night I was surprised to realize I’d been there almost three hours.  I smiled the entire walk home from the restaurant.” – Cameron, GrubWith.Us Diner

“I like trying new dining spots and I like meeting new people – it was  perfect match.  Also, I was going with a friend, so if everyone was lame we at least had each other!” – Jessica, GrubWith.Us Diner

When asked if they would attend another event, each diner I spoke to gave me a resounding “Yes”! A quick investigation a few days later revealed a couple of the diners I dined with had already signed up for upcoming meals.

Restaurant owners are also enthusiastic about the GrubWith.Us partnership. After our meal I was able to get a few words from Chef Anthony Barbanente who said, “I really like the idea of the social networking and dining experience. I think that fits our restaurant really well. …. GrubWith.Us balances the needs of each of the partners involved perfectly.”

At the end of the dinner Chef Barbanente and founder Eddy were already talking about plans to make the next GrubWith.Us meal bigger and better.

Since the site launched in August over a 1,000 people have signed up and GrubWith.Us has hosted five meals. The GrubWith.Us website offers registrants some social networking features including a small profile, a referral program for friends, reviews, and a messaging system. The website is still in its beta phase but we can expect much more to come in the future.

The GrubWith.Us concept started as an in-home dining experience, where individuals would host dinners at their home. However, not everyone had the space to host large parties and many felt uncomfortable letting strangers into their home.