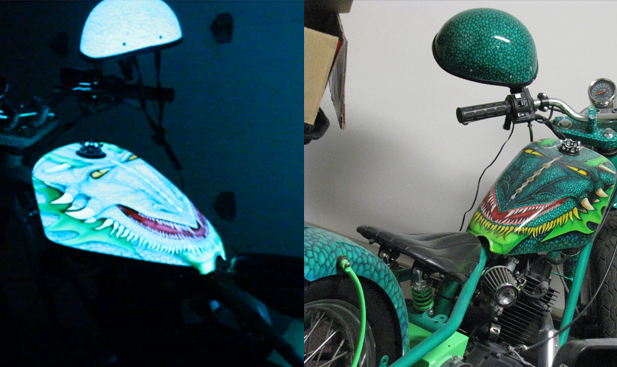 What if your bike could glow in the dark—permanently? Thanks to a Northeast Ohio startup called Darkside Scientific, this scenario isn’t just a sci-fi pipe dream. The growing company has developed an electroluminescent paint coating product called LumiLor that has the potential to transform a variety of industries with just the flip of a switch.

“Essentially, what you have is a coating system that you’re able to spray onto any surface—such as metal, plastic and wood—of any shape,” says CEO Shawn Mastrian. “With that you can turn a box into a light; you can turn a motorcycle tank into a light. Anything you want, really, you can spray it with our coating and have it light up on command when you wire it to electricity.”

The technology that eventually evolved into LumiLor was the brainchild of Darkside Scientific owner Andy Zsinko, who had plenty of experience doing automotive after-body paint work. According to Mastrian, a friend “challenged” Zsinko to come up with a coating system for a motorcycle that was new and innovative.  The tinkerer developed a glow-in-the-dark coating, but was frustrated by the product’s shortcomings—namely, that “it worked very well when you put light to it. The problem was, five minutes later it wasn’t lit,” Mastrian says. Zsinko recognized that, with a charge, illumination could be produced all night long and that’s how he “took things to the next level.”

While Mastrian notes LumiLor has a variety of potential uses–including illuminating traffic signs or road surface/lane markings—one of the company’s biggest challenges is figuring out the market for its product. “The existing market for electroluminescence is basically a novelty toy market,” he says. “There’s not really an existing market for what we’re doing. We have to define our market. For example, are we a paint, or are we a light system? There are no testing and certification criteria for electroluminescent paint, because such a thing has never existed.”

Currently, Darkside is investigating its after-market and product development opportunities. “What we need to do is sometimes act as an electrical wiring device, and sometimes as a coating system, and solve the problems of both of those,” Mastrian says. So far, Darkside Scientific has built on Zsinko’s expertise and mainly focused on partnering with shops in the automotive after-market. In March, the company debuted its product at the popular Daytona Bike Week, on a motorcycle it dubbed (appropriately, given its lizard-like design) Dragon Heist; another intricately designed bike—which the company has been spotlighting on Facebook —debuts July 5.

In another big milestone, Darkside Scientific also recently received a U.S. patent for the LumiLor Electroluminescent Coating System, an achievement four years in the making. It’s also expanding its LumiLor Labs (where it produces the product), in order to serve its growing customer base. Clearly, Darkside Scientific has a very bright future.

“We have a network of people that are waiting to go, just waiting to apply LumiLor,” Mastrian says. “We need to make sure that we have the capabilities and absolute most professional facilities to deliver the necessary training. So that’s our next step,  to nail that down so we can start to expand that business—and let it grow as much as it can grow on its own.”