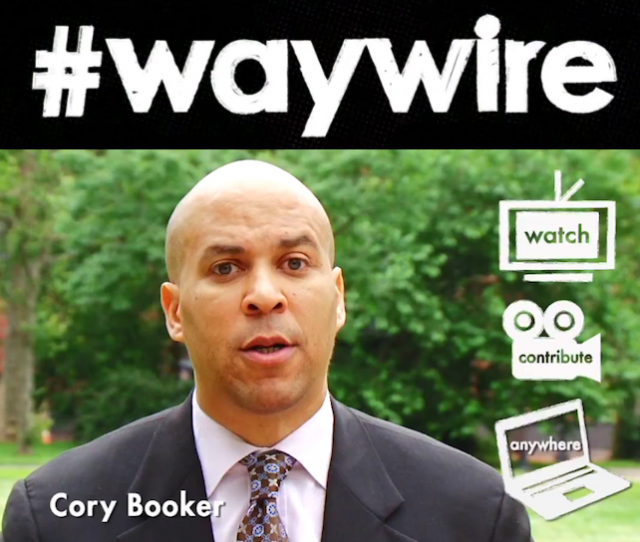 Newark mayor Cory Booker is helming a social news startup that he says will give voice to the Millennial generation and democratize how media is shared and consumed.

#Waywire will incorporate user-generated video responses alongside original and outside content. The hashtag that is consistently included with the name of the site reinforces what the venture says will be a deep commitment to social sharing and to giving every news consumer a virtual klaxon with which to respond to content.

Booker, though, seems to see a greater narrative of liberation from a narrow, orthodox set of views propagated by a media aimed at an older generation.

“Traditional media is controlled by a handful of companies with one destination and a specific point of view,” Booker said, “while [Millennials] have come of age expecting social media, user-generated voices, the open web and technology led media.”

In addition to the generational rhetoric of the project (Booker himself is 43), there’s a flavor of opinion sharing, an increasingly crowded field of attempts to attract and curate a social graph based on political and moral convictions.

#Waywire raised $1.75M in a seed round that reportedly included Google’s Eric Schmidt, Lady Gaga’s manager Troy Carter and television star Oprah Winfrey, a prominent Booker supporter. The project has already received praise in the web and business communities largely on the merit of Booker’s notability, and in light of a widespread perception that news consumption is ripe for a methodological and revenue overhaul. Other commentators have noted that Booker — as well as #waywire CEO Nathan Richardson, a protege of The Gilt Groupe — are working hard to target a precise demographic, without whom it is difficult to imagine the project gaining traction.

Does the project aim to attract older users, as well?. It’s not clear, but Booker is leaving the possibility open: It will appeal, he said, to “the product and voice built by and for [Millennials].”

The Stanford-educated Booker has nurtured a public image as a justice-hungry outsider, some say in a long-term bid for a higher office. He became mayor of the embattled Jersey city of Newark in 2006 — and in 2009, turned down an a prestigious offer to lead the Obama administration’s Office of Urban Affairs Policy, saying that he felt he could do more good in Newark.

Valve To Distribute Indie Titles Based On Community Feedback